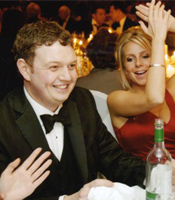 Richard Pinner is Vice President of the prestigious Magic Circle and Inner Circle member with Gold Star, in addition to being a multi award-winning magician.

As a performer Richard Pinner has visited over 30 countries. With shows ranging from 4 minutes at a board meeting through support act for Victoria Wood to New Year's Eve Cabaret in New Zealand.

Richard Pinner is a highly skilled and experienced performer which, combined with his talents as a ‘magical creator' (a bit like a real life Jonathan Creek), gives him the insight to visualise and perfect each aspect and detail of an illusion. Years of experience in creating such illusions for stage and screen means that Richard can make the impossible "Almost Impossible". Do you need a car to vanish before your eyes? A person to float in mid air? An audience to gasp in disbelief? Are you planning an occasion and want to mark it with a bang? Then look no further than Richard Pinner!

Richard also is in great demand by his peers in the magic industry, having travelled throughout the USA and to Australia and New Zealand to lecture at magic conferences and conventions.

On stage, Richard has transformed Rupert Everett in to a floating orange blob at the Hampstead Theatre and taught Jude Law the magic he needed to become Dr Faustus at the Young Vic. For the Film 'Miranda' Richard enabled Christina Ricci to have the skills of a practised card sharp. He was also called upon for the premiere of the final Harry Potter film when they needed to create some 'real' magic!

Incredible feedback, utter professionalism and all three of you added literally a 'touch of magic' to last night's ball. We are overwhelmed here with the fund-raising total which is somewhere in the region of £280,000 and still counting!

Your wonderful table entertainment added greatly to the success of our event.

In addition to his marvellous skills, he has enormous charm and humour.

We booked Richard for a recent virtual ‘comedy club’ event for our total business, in light of ‘Blue Monday’, to bring some laughter to our team and their families. Richard did a seamless 30minute set which involved him calling on our ‘virtual front-row’ for support with his tricks. Everyone was completely impressed and entertained by his magic and persona, and the tech element he bought to the table with his green screen was really engaging. Overall proved to be a brilliant booking choice!

How to book Richard Pinner for your event