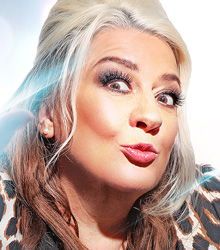 Mandy Muden is unique — a one woman fusillade of camp comedy and mind-blowing magic. The only women ever to combine stand up comedy and magic on the UK comedy circuit, Mandy has a striking personality with razor-sharp wit and so creates a fantastic rapport with the audience, demonstrating a tour-de-force in interactive entertainment.

In 2018, Mandy wowed the judges on Series 12 of Britain’s Got Talent and reached the live semi finals, where she finished third place in her heat and narrowly missing a place in the grand final.

Having performed all over the world from comedy clubs to the most prestigious of corporate events, Mandy can adapt her show to any type of event and audience. She has performed at as far reaching destinations as Opel cars - Sicily, BT - Casino Gran Ciculo - Madrid, Hilton Hotels - Dubai, Faqura Country Club - The Lebanon, Imperial Palace Hotel - Las Vegas, The Magic Castle - Los Angeles, VW - St. Petersburg, Nokia - Singapore, Cartier - Hong Kong, Jumeirah Beach Hotel - Dubai... and all the major UK venues and events including The Queen's Golden Jubilee concerts - Buckingham Palace, Premiers of Harry Potter and the Philosopher's Stone and Funny Bones, Grosvenor House, Ritz, The Dorchester, The Savoy, Cliveden, Gleneagles and The Hilton, Park Lane.

In addition to performing on stage, Mandy Muden is also one of the UK’s finest and most experienced female close-up magicians. Her skilled sleight of hand and sharp humour is sure to make any event one to be remembered.

Mandy is also a popular awards host and compere.

Imagine a Sexy Tommy Cooper minus the Fez.

How to book Mandy Muden for your event