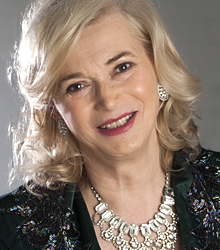 Fay Presto is unquestionably the UK's most successful female close-up magician. Voted The Magic Circle Close-up Magician of the Year 2012 and a former Tatler 'Party Entertainer of the Year', Fay has been personally invited to entertain Her Majesty The Queen on no less than six occasions, as well as performing for every other senior member of the Royal family.

A Gold Star Member of The Inner Magic Circle, Fay’s powerful personality-based magic and ability to connect with an audience has set a standard within the magic industry.

Television appearances include Wogan, History of Magic, Heroes of Magic, Emmerdale (as herself, something that at the time had only ever been done by HRH The Prince of Wales in Coronation Street.), Talking Telephone Numbers, Paul Daniels’ Secrets, The Late Late Show (Gae Byrne), Stuff The White Rabbit, This Morning, James Whale, Trick on 2, Dinner Dates and The Car's The Star.

The BBC's 40 Minutes documentary 'Illusions of Grandeur' showing Fay in all aspects of her home and professional life, produced one of the most positive responses that the BBC has ever had from the public and is considered one of the best ever in the series. It has been repeated twice here and shown everywhere from Europe to Australia.

Fay Presto has been the resident magician at famed Langan's Brasserie in London's Mayfair for over 25 years and, when not entertaining at corporate or private events, can be seen wowing and amazing diners at a number of other top London restaurants.

Fay Presto is available for both corporate and private events. Equally at home performing for a few people in the intimate settings of a dinner party, or at a large corporate function, festival, wedding, conference or gala awards night, Fay is guaranteed to lift any event and provide the perfect icebreaker.

When presenting her unique and highly memorable brand of magic, Fay Presto's style is to mix and mingle between the tables during the course of your dinner (or drinks/canapés reception if there is no seated meal) entertaining and ‘wowing’ your guests.

Fay Presto’s after-dinner cabaret show offers the same style of high-impact and astounding magic as the close-up / table entertainment but involves the audience as a whole and can include a number of the guests participating in the show. Fay’s cabaret show represents the ideal way to round off an evening* or bring the focal point to the front of the room before speeches or announcements commence. Please ask your NMP Live Booking Agent for further details.


* Schedule of events for the evening and venue suitability permitting.

If you're in a restaurant and a magician approaches the table, you had better hope it's Fay Presto. She's the best there is!

The best magician there is.

Fay Presto, you're a bloody genius.

Fay Presto blew me away

Just wanted to say that Fay Presto was absolutely brilliant - quite amazing and she MADE our evening. Thank you so much. Barry had no idea she was there for him. He loved his party. Our guests were literally amazed. What a brilliant performer. She learnt our guests' names and so we felt very involved and engaged. Thank you and please thank Ms Presto again.

Fay was our wedding magician – something we had always dreamed of. She is the best. So it had to be Fay! She had everyone in stitches and the atmosphere was so alive during and after her intimate performances around the tables and with each and every guest included one way or another. She had great fun with the children getting up and involved and was just the most wonderful part of our day. As for Fay – a lifelong advocate of equality and freedom – doing things her way as she sees fit! An inspiration that it is an honour to have as part of our special day. And as for magic talent… she defies explanation. Defies logic and rationality. Confounds and confuses with endless laughter. A master. No. The true Mistress of Magic.

Fay Presto was excellent - I’d seen her before at Langan’s but exceeded my expectations. Please thank her very much.

Clients often ask about purchasing books for giveaways and delegate packs. Below you’ll find a selection of products by Fay Presto. Click the images to view on Amazon's website. For bulk orders, please speak with your Booking Agent.

How to book Fay Presto for your event