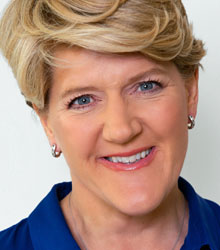 One of the BBC's main sports presenters, Clare Balding fronts all its live racing coverage, including the Grand National, Royal Ascot, the Derby and l'Arc de Triomphe.

A presenter of both the Olympic and Paralympic Games from Beijing in 2008, Athens in 2004 and Sydney in 2000, Clare has been part of BAFTA award winning coverage for a decade. She can turn her hand to Winter Olympics (2002 and 2006), Commonwealth Games (2006), rugby league, three-day-eventing, show-jumping, swimming, golf, tennis, bowls or darts. In 2002 and 2004 she was one of the presenters of Sport Relief.

A regular presenter on Radio 4, she has fronted Saturday Live, Woman's Hour, Pick of the Week, Broadcasting House and (for the last 9 years) the walking series Ramblings. On 5 live, Clare Balding is part of the team that presents the National Hunt Festival from Cheltenham, co-presents its Wimbledon coverage and last year became the first woman to commentate on a Wimbledon final. She also works on the golf coverage at the Open.

She has made guest appearances on numerous TV shows including Have I Got News For You, A Question Of Sport, They Think It's All Over, Countdown, Call My Bluff, Test The Nation, University Challenge, Weakest Link and Mastermind.

In 2003 Clare Balding started to branch out of sport, presenting a new series, Housecall In The Country, a live weekday magazine programme covering a variety of lifestyle topics. She has also worked on The Lord Mayor's Show since 2003, Trooping The Colour and in 2006 was the first voice on BBC One as she welcomed in the New Year live from the Embankment. Clare has three times hosted BBC Two's coverage of Crufts and presented a 10-part series, also on BBC Two, called Race Country.

Clare, a Cambridge graduate, was elected President of the Union in 1992. She was a good all-rounder in sport, and was champion lady rider in 1990 and leading amateur flat jockey in 1989 and 1990. Clare Balding was honoured with the Horse Writers and Photographers Association (HWPA) Racing Journalist of the Year Award in 2003 and in 2004 she won both the HWPA Sir Peter O'Sullevan Broadcaster of the Year award and the prestigious Royal Television Society Sports Presenter of the Year award. In 2009, she was praised for “perfect presentation” by the judges of the Broadcast Awards who named the Grand National 2008 as their sports programme of the year.

Clare Balding is an experienced host of awards ceremonies, a lively and amusing after dinner speaker and an authoritative voiceover artist

Clients often ask about purchasing books for giveaways and delegate packs. Below you’ll find a selection of products by Clare Balding. Click the images to view on Amazon's website. For bulk orders, please speak with your Booking Agent.

How to book Clare Balding for your event