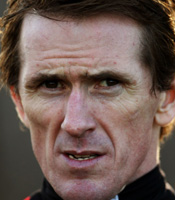 When AP McCoy first became champion jump jockey in 1996, Roger Federer had never won Wimbledon, Usain Bolt was an unknown kid in the Jamaican backwaters and Muhammed Ali had just lit the cauldron at the Atlanta Olympics. Two decades later and AP McCoy remains the world's greatest jump jockey and one of the UK's most talented sportsmen.

AP ended his truly phenomenal career as Champion Jockey for the 20th consecutive year, recording 4348 wins (which includes the 2010 Grand National, the prestigious Cheltenham Gold Cup, Champion Hurdle, Queen Mother Champion Chase & King George VI Chase). He remained at the top for 1040 weeks - longer than any other sportsman. This incredible man and BBC Sports Personality of the Year spent his career setting records which will not be broken in our lifetimes – a tribute to his stamina, endurance, motivation and dedication to the world of sport. We have had champions, we have had legends, but we will never have another AP McCoy.

AP is associated with some strong brands – brands that reflect his ambition, endurance and motivation. He is an Ambassador for Albert Bartlett, William Hill & the Face of Cheltenham Racecourse. He is part of BBC Radio 5 Live's Racing team and President of the Professional Jockey's Association. AP is an exclusive columnist for The Times newspaper. He has also written autobiographies and the fictional book “Taking the Fall“. A film about his life and career – “Being AP” - is currently in production and will reach over 200 cinemas in October 2015.

In April 2015, a week after hanging up the saddle, AP received BT's Outstanding Contribution to Sport award.

As a result of his outstanding career, AP McCoy is an exceptional after-dinner, corporate and motivational speaker. His experience, humour and personality endears him to any audience: his stories from the saddle, his fear of failure, his quest to be the best at all times, how he motivates himself every day, breaking his bones over 700 times, the pressures and dangers of his sport makes for a lively Q&A.

Clients often ask about purchasing books for giveaways and delegate packs. Below you’ll find a selection of products by AP McCoy OBE. Click the images to view on Amazon's website. For bulk orders, please speak with your Booking Agent.