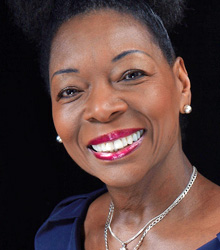 Baroness Floella Benjamin DBE is an award-winning producer, actress, author, parliamentarian, TV presenter and advocate for the welfare and education of children. However, she's best known as a presenter of the iconic BBC children's TV programmes Play School and Play Away, during the 1970s and 80s.

Born in Trinidad, Floella arrived in a cold, unwelcoming England in 1960 as a 10 year old child, and as an adult she has been outspoken about the racism she experienced as an immigrant. She left school at 16 to work in a bank, with the aim of becoming Britain's first ever black woman bank manager, and studied for A-levels at night school, but changed direction and became an actress and presenter.

After a spell as a stage actress, in 1976 she began presenting children's TV programmes, which led to fronting the pre-school children's programme Play School for 12 years. Each programme followed a theme and included songs, stories and activities with the presenters, along with a short film introduced through either the square, round or arched window. This then led to her presenting sister programme Play Away, aimed at slightly older children, which ran until 1984.

In more recent times, she appeared in a 2006 episode of The Line of Beauty. In 2007–09, and again in 2011, she guest-starred in a Doctor Who spin-off The Sarah Jane Adventures as Professor Rivers. She narrated three 'making-of' documentaries on the Doctor Who DVD box-set The Black Guardian Trilogy. In 2007, she played a small role in the comedy film Run Fatboy Run. She has now been in show business for five decades appearing on stage, film, radio and television.

Floella Benjamin has authored over 30 books, and in 2016 the autobiographical Coming To England, which gives an account of her challenging early experiences in Britain, was chosen as a 'Guardian Children's Book of the Year'. It's now used as a resource for schools in social and cross-curricular areas. The book was adapted into an award-winning film for BBC Education.

Her broadcasting work has been recognised with many awards, including an OBE for services to broadcasting in the 2001 New Year Honours, when at that time Floella was chairwoman of BAFTA. She also received a BAFTA Special Lifetime Achievement Award in 2004 and the J.M Barrie Lifetime Award in 2012 for her lasting cultural legacy. In 2013 she was made a Fellow of the Shakespeare Birthplace Trust and appointed President of the Society of Women Writers and Journalists.

In the 2010 Dissolution Honours List, Floella Benjamin was appointed a Liberal Democrat Life Peer when she was elevated to the House of Lords as Baroness Benjamin of Beckenham. She was Chancellor of the University of Exeter for 10 years until 2016, where she'd become known for hugging graduates instead of traditionally shaking their hands during the graduation ceremony, and imploring them to 'change the world'.

She was successful in lobbying the government to introduce legislation through OFCOM, the broadcast regulator, to force much greater investment in UK-made children's TV programmes. Her mission is to make the world a better place for children.

In 2018, she was granted Honorary Freedom of the City of London and the Prime Minister appointed her Chair of the Windrush Commemoration Committee to create a lasting memorial to celebrate the contribution to Britain made by the Windrush Generation.

In March 2020, Floella was awarded a Damehood (DBE) in the New Year Honours List for services to charity, taking the official title Baroness Benjamin of Beckenham DBE.

One of the most genuine, passionate and inspiring speakers on our roster, Floella's presentations are candid, heartfelt and frequently elicit feedback such as "you really showed us all the true power of positivity - and I know everyone walked away from the experience overwhelmed by your infectious joy, enthusiasm and ability to keep on smiling".

I felt compelled to say a huge thank you on behalf of everyone at PHMG for your exceptional presentation yesterday. I personally was incredibly moved and inspired by your words, and I know this is a sentiment reflected by everyone who was lucky enough to hear from you... we asked you to speak as part of our Black History Month celebrations, and I can think of no better individual to have joined us for this initiative. The stories you told us about your experiences moving to the UK were so important, and hugely eye-opening in helping us understand the challenges still faced. Most remarkably, you really showed us all the true power of positivity - and I know everyone walked away from the experience overwhelmed by your infectious joy, enthusiasm and ability to keep on smiling.

Please pass on our deepest heart-felt thank you to Baroness Floella Benjamin. She touched all our minds, hearts and souls today and it was a very special experience. The feedback so far from everyone has been overwhelmingly positive, it was a real highlight of the year!

Our recent event with Baroness Floella Benjamin was very successful and we received a lot of excellent feedback afterwards. She was articulate and engaging and we were able to successfully execute our celebrations for International Women’s Day with her involvement. Thank you for recommending her.

Clients often ask about purchasing books for giveaways and delegate packs. Below you’ll find a selection of products by Baroness Floella Benjamin DBE. Click the images to view on Amazon's website. For bulk orders, please speak with your Booking Agent.

How to book Baroness Floella Benjamin DBE for your event

To book Baroness Floella Benjamin DBE, please submit an online enquiry, email bookings@nmp.co.uk or speak with one of our booking agents on +44 (0)1372 361 004.

An award-winning speaker on creativity, leadership and education

An award-winning speaker on creativity, leadership and education