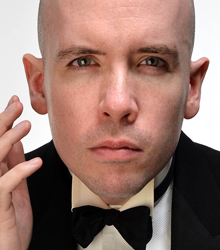 Tom Allen is a comedian, actor and writer whose unique style of sharp, acerbic wit and camp, riotous storytelling has seen him become a household name in the UK.

He is host of The Apprentice: You're Fired, co-host of Bake Off: The Professionals, a regular on Bake Off: An Extra Slice and There's Something About Movies, as well as making numerous appearances on Mock The Week, Live At The Apollo, Hypothetical, The Royal Variety Performance, 8 Out Of 10 Cats, Cats Does Countdown, Would I Lie to You and Roast Battle. He has also presented the flagship BBC fundraiser events Children in Need and Sport Relief.

Tom started as a stand up at the age of 22 and went on to win both So You Think You’re Funny in Edinburgh and the BBC New Comedy Awards in the same year. Since then he has honed his unique style to audiences all over the UK and around the world.

Other television appearances include Channel 4’s 8 Out of 10 Cats Does Countdown, Comedy Central’s The Comedy Store Presents and the John Bishop Show as well as Channel 4’s Comedy Gala at the o2. In 2016-17 he has also supported Sarah Millican on her sold out tour of Australia, New Zealand and the UK.

In the past, Tom Allen has performed at Montreal’s Just For Laughs as well as Sydney, Adelaide and Melbourne Comedy Festivals and has supported Reggie Watts and Eugene Mirman in the US.

He has written articles for The Scotsman, The Independent, The Lady and The Guardian and contributed material to The Now Show and Mock the Week whilst Attitude Magazine called him a gay role model.

As a teenager, Tom was the youngest member of the Noel Coward Society, and aged 16 he dressed in Victorian clothing in a bid to distract people from the fact that he was gay. As Tom reflects, it was a flawed plan.

Excellent, professional and great comments from everyone.

Tom Allen proved to be a first-class booking choice for our recent virtual ‘comedy club’ event. This event was designed for our total business, in light of ‘Blue Monday’, to bring some laughter to all employees, and that’s exactly what Tom delivered. With strong interaction with our preselected ‘virtual front-row’, picking on individuals’ personal interests and hobbies, Tom got heaps of people involved and had the whole team howling. Also referencing our company and brands, his set felt super personal, relatable for our team and solely tailor-made for us. Overall a real hit, with 100% positive feedback!

Clients often ask about purchasing books for giveaways and delegate packs. Below you’ll find a selection of products by Tom Allen. Click the images to view on Amazon's website. For bulk orders, please speak with your Booking Agent.

How to book Tom Allen for your event