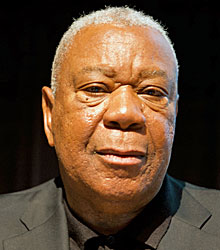 Sir William Atkinson is recognised as one of the UK’s most successful head teachers. In 1994, comprehensive Hammersmith High School in west London was one of the country’s most notorious schools, in fact, it was listed as one of the worst schools in England.

There were reports of pupils throwing furniture out of windows, trading drugs, setting fire to buildings and covering every surface with graffiti, five heads and acting heads in two years, teachers threatened with rape and police having their handcuffs stolen when they visited. Additionally, about two-thirds of the pupils had learning difficulties or disabilities, a tenth were refugees or asylum seekers and about half spoke English as a second language. The area was the seventh poorest in England.

Consequently, only four per cent of its pupils achieved five top-grade GCSE passes and independent reviewers deemed the school so disastrous it was nearly closed by government on several occasions.

When Atkinson visited the school to write a report at the local council's request, he noted of the pupils: “Out of control, poor self-esteem, insolent and aggressive.” Of the teachers: “ineffective.” And observing senior staff he wrote: “little evidence they do more than crisis management.” His conclusion: “The school is actively disabling pupils and consigning them to the growing underclass. Should close immediately."

In despair and a final attempt to save the ailing school, the education council turned to Sir William — already a successful and respected head teacher with over forty years in the education system — to take over the school, which he did in 1995 (after initially declining) and immediately renamed it Phoenix High School.

He also caveatted the acceptance with two conditions — firstly, there would not be a competitive interview; he would be the sole shortlisted candidate. Secondly, he would do the job without any interference. He made it clear there would be disagreements with some of his actions; however, they'd had their chance to do it their way and it hadn't worked.

By 2010, the transformation within Phoenix High School was incredible. The school stood at the top of the Government's exam league tables for improved performance with a figure of 96 per cent. OFSTED concluded “The Phoenix is a remarkable School; it continues to transform the life chances of both students and their families. It can do this because the School operates from a deeply rooted understanding and heartfelt appreciation of the challenging circumstances that many of the students come from.”

Jamaican-born Atkinson moved to the UK aged 7, and due to a mix up with his brother, two years senior, was placed in a class of nine-year-olds. Seven-year-old William, who had never been to school before, was deemed to be thick. Two years later, with the mistake still undiscovered, he sat the 11-plus and unsurprisingly, failed. Shortly afterwards, his real age was at last revealed and, after two further years, he took the 11-plus again and failed again. This makes William, he says with great delight, the only teacher in the country to have failed the 11-plus twice.

Lost in the education system and finishing school with just one ‘O’ level, the young William chose to stay on at school after seeing his brother fail to get jobs because of his skin colour. After an encounter with a teacher who inspired him and challenged him to aim high, William succeeded, going on to join the profession himself. In 1971, he took up his first teaching appointment at Portsmouth Modern Boys’ School.

He soon moved to London and began to make a name for himself while teaching at several schools, all of them in multiethnic communities. Promoted positions followed prior to the offer to head the then Hammersmith comprehensive.

Sir William provided the inspiration for Lenny Henry's head teacher character, who turned around a failing school, in the BBC TV drama Hope and Glory. He has also been featured widely in the media, including Channel 4 documentary series The Unteachables and appearances on NewsNight, Question Time, The One Show and Panorama.

He was a member of the London Black and Minority Ethnic Cracking Crime Partnership Board until 2006, and a Deputy Chair of the UK Judging Panel for The Teaching Awards until 2009. He was also a member of the British Board of Film Classification advisory panel on children's viewing until the summer of 2010.

He was Knighted in 2008 by Her Majesty The Queen for services to education and community relations.

Sir William Atkinson believes that whatever people are, they have the capacity to be bigger and better than they think they are. And where children are concerned, he provides those less fortunate or able with opportunities and allows them to achieve beyond their disadvantaged backgrounds.

Sir William comments that the key to raising standards was to have the highest expectations of pupils and the community.

Transformational Leadership Through Adversity — Keynote Motivational Speech
Through his inspiring and motivating keynote speech, Sir William talks about his incredible experience transforming a deprived and notorious west London school in Hammersmith to an “outstanding” institution, as independently rated by OFSTED.

Taking helm of the school in 1995, then ranked in the bottom eight in England, the focus of his presentation is the incredible four years of the school’s transformation. He vividly recalls the ups and downs, the challenges and lessons learned from those ensuing years, sharing his experiences on everything from leadership and goal-setting to managing the culture, resilience and focus of his staff.

Sir William’s keynote speech is a master class and an immensely inspiring and moving story. Not only is it a fantastic opportunity to hear firsthand the story of Phoenix high school, from the man who turned it around, but also to learn about the vision, leadership and staying-power required to make a difference in one of the most deprived areas of the UK.

Identifying weaknesses in the education system and taking on a failing entity, overcoming huge challenges and developing innovative methods to educate the next generation, Sir William Atkinson is a highly sought-after keynote and motivational speaker who combines an inspiring personal story with lessons from motivating others and leading by example.

William was great, he was very charismatic and engaging, a real pleasure to listen to. Feedback from delegates has been very positive.

We were enthralled by his experiences and his determination to overcome challenges.

On behalf of the team at NEUPC, I would like to thank Sir William for the opening Keynote session he delivered at our NEUPC members conference Procurement in Practice on Tuesday 26 April.We really appreciate the knowledge he shared and the inspiration he provided for our members. We have had fantastic feedback from our delegates, they really found the keynote session engaging and informative.

How to book Sir William Atkinson for your event