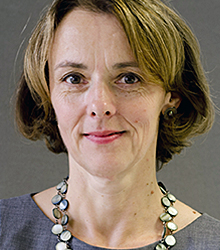 Award-winning journalist turned teacher, Lucy Kellaway, is a former management columnist for the Financial Times — a position she held for over twenty years — who, in 2017, retrained to become a secondary school teacher.

In 2017, whilst undergoing teacher training, Lucy co-founded educational charity Now Teach together with social entrepreneur, Katie Waldegrave; a non-profit designed to recruit teachers from middle-aged professionals who are fed up with their first careers.

During her 25+ year career in journalism, Lucy worked as energy correspondent, Brussels correspondent, a Lex writer, and interviewer of business people and celebrities, all with the Financial Times. She is best known for her satirical commentaries on the limitations of modern corporate culture — poking fun at management fads and jargon and celebrating the ups and downs of office life.

Lucy has written several amusing and well-reviewed books. Her first, Sense and Nonsense in the Office, was followed by Who Moved My Blackberry? in which she followed a year in the life of her fictional creation, Martin Lukes, through his e-mails. A self-obsessed master of corporate double speak and management jargon, Martin is a satire of the type of executive who embraces every new motivational and marketing fad that comes along.

Her third book The Real Office: All The Office Questions You Never Dared To Ask, was described by the Sunday Times as ‘dispensing water-cooler wisdom, not motivational gobbledygook. It gets to the heart of those tricky questions that employees, rather than employers, want answered.

In 2021, Lucy Kellaway wrote Re-educated How I Changed My Job, My Home, My Husband and My Hair. Published by Ebury Press, it is a candid and frank account of why, at the age of 57 and to the bafflement of friends and colleagues, Lucy resigned from her long-term post as a columnist for the Financial Times to retrain as a teacher.

In 2006, Lucy Kellaway was appointed a non-executive director of Admiral Group. In 2013, she presented the History of Office Life for BBC Radio 4 and she is a regular contributor to the BBC World Service programme and Business Daily.

In 2012, she was awarded an Honorary Doctorate by the University of Essex and in the 2021 Birthday Honours, Lucy was appointed Officer of the Order of the British Empire (OBE) by HM The Queen for services to education.

Born in London, Lucy graduated from Oxford University with a degree in Politics, Philosophy and Economics.

Known for her witty insights into management culture and office life, Lucy Kellaway is an entertaining speaker who’s presentations are hilariously funny and packed with her unique tongue-in-cheek brand of astute asides and satirical sense of humour.

Lucy shares her experience as Agony Aunt for the Financial Times, offering her frank, down-to-earth advice and practical tips for negotiating the minefield of the modern office. Reflecting on entertaining stories, Lucy covers the work dilemmas to which we all wish we had the answers.

Clients often ask about purchasing books for giveaways and delegate packs. Below you’ll find a selection of products by Lucy Kellaway OBE. Click the images to view on Amazon's website. For bulk orders, please speak with your Booking Agent.

How to book Lucy Kellaway OBE for your event