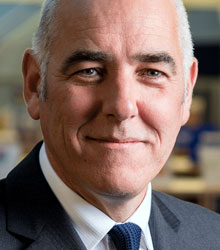 Baby Boomers, Generation X… Generation Y… Generation Z… for the first time in history, all four generations can be found working together in companies and organisations around the world. Dr Paul Redmond’s research and keynote talks are at the forefront of what this means for managers, recruiters, HR specialists and individuals.

Dr Paul Redmond is the Director of Student Experience and Enhancement at the University of Liverpool and one of the UK’s leading experts on the graduate employment market. During his career he has worked at a number of leading universities and has been responsible for guiding the careers of thousands of students and graduates. He has presented at numerous conferences and events around the world.

In addition to writing regularly for national newspapers and other publications, he is a frequent guest on both radio and TV, appearing on numerous BBC and independent news and current affairs programmes. Since 2014, Paul has produced a regular, and highly popular, diary column for the UK’s Association of Graduate Recruiters magazine.

Paul’s research into ‘Generation Y’ (aka ‘Millennials’) and their impact on organisations has garnered him praise and respect from a range of national and international organisations, for which he provides consultancy.

Paul’s media work includes numerous BBC and independent news programmes and bulletins. In 2011 he collaborated with the BBC and Tiger Aspect in the making of ‘Who gets the best jobs?’ a groundbreaking series of documentaries on the impact of social class on the graduate job market. Paul’s work on the rise of the ‘Helicopter Parent’ had led to appearances on numerous BBC and independent TV programmes, including the Jeremy Vine show.

Paul is the author of several books, including the best-selling ‘The Graduate Jobs Formula’, ‘A Parent’s Guide to Graduate Jobs’, ‘Talking about my Generation’, and ‘Making it Happen – the new world of graduate recruitment’ (co-authored). He has also written and published numerous other reports, studies and research publications.

In 2010, in recognition of his writing and research, Paul was awarded a Fellowship of the Royal Society of Arts.

Generational Naming
Baby Boomers - Born in the years following the Second World War, between 1946-1964, when there was a marked increase in the birth rate. Baby boomers had good economic opportunities and were largely optimistic about career development. Generally they have a strong work ethic and are self-assured, independent, competitive and resourceful. They are also team oriented and disciplined.

Generation X - Gen X were born between 1965-1979, representing a generational change from the baby boomers. Sometimes referred to as the “lost” generation, Generation X children are independent, resourceful, and self-sufficient. They value freedom and responsibility in the workplace. Many in this generation display a casual disdain for authority and structured work hours. They dislike being micromanaged and embrace a hands-off management philosophy.

Generation Y - Gen Y, or Millennials, were born between 1980 and 1994. The Generation Y cohort are often referred to as Millennials, or the Internet Generation. They are incredibly sophisticated, technology wise, immune to most traditional marketing and sales pitches. Gen Y members are much more racially and ethnically diverse and more segmented as an audience, aided by the rapid expansion in Cable TV channels, the Internet, e-zines, etc.

Generation Z - Gen Z is the newest generation to be named and were born between 1995 and 2012. Being independent, self confident and autonomous are also some of the key characteristics of generation Z. They do not rely on their parents as much as previous teen generations did. Gen Z representatives have short attention spans and are less focused than their predecessors.

Dr Paul Redmond is one of the UK’s leading experts on generational change and the future of work.

Paul has guided the careers of thousands of students and graduates at the University of Liverpool, one of the UK’s leading universities. In addition, he has held visiting lectureships at various leading universities and his research into ‘Generation Y’ (aka ‘Millennials’) and ‘Helicopter Parents’ has garnered him praise and respect from a range of national and international organisations.

Paul is the author of numerous books, reports and studies including the best-selling ‘The Graduate Jobs Formula.’ He writes a popular diary column for the UK’s Institute of Student Employers (ISE) magazine and other publications such as the ‘Good Universities Guide.’ For his contribution to knowledge and learning, in 2010 Paul was awarded a Fellowship of the Royal Society of Arts.

As a speaker, Paul is lively, engaging, witty and thought-provoking. His unique mix of expertise and entertainment works superbly with audiences around the world.

Dr Paul Redmond’s keynote topics include:
· Generations at Work – managing and motivating a multi-generational workplace.
· Mind the Gap: how to recruit, retain and respond to today’s millennials.
· Generation X: how to get the most from the forgotten generation.
· How to target, engage and sell to each generation
· Employability and the rise of ‘Zombie’ jobs – how to stay not just employed, but employable.
· Wellbeing at work: how to achieve happiness and wellbeing at work.
· Graduate Recruitment – recruitment advice for the 21st century.

Paul was a relaxed and superb speaker. He immediately engaged with the people in the room and delivered a slick, humorous and informative presentation.

Paul had the audience completely hooked from the moment he started speaking – he definitely struck a chord.  I’ve heard him speak three times now and have been hugely impressed.

Fantastic presentation, both very entertaining and entirely relevant for the audience. The highlight of the conference for many of our delegates.

Stimulating, insightful and well-judged. His ability to deliver content in an intelligent and upbeat manner ensures that clients remain engaged and fascinated by his content.

Out of this world and many people are describing it as the best Premier they can remember.

Clients often ask about purchasing books for giveaways and delegate packs. Below you’ll find a selection of products by Dr Paul Redmond. Click the images to view on Amazon's website. For bulk orders, please speak with your Booking Agent.

How to book Dr Paul Redmond for your event