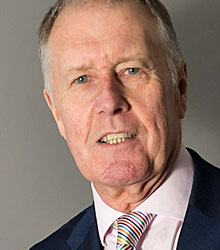 Sir Geoff Hurst MBE, an iconic figure in international sport, secured a unique place in the history of football when he became the first - and over forty five years later still the only - player to score a hat-trick in a World Cup Final.

Born in 1941, Geoff Hurst lived the first eight years of his life in Lancashire, before moving to Essex in 1949. Geoff went to school at Kings Road Primary, where he divided his sporting interests between football and cricket. Excelling in both, it was not until he reached 17 that football started to dominate his ambitions when his first job interview was a trial at West Ham United. Cricket continued to play a role in Geoff's life playing for the Essex Second XI. A first-class match for Essex against Lancashire in 1962 was to be the peak of a promising career but later that year Geoff decided to concentrate exclusively on football.

Initially a strong-running midfielder, the West Ham manager, Ron Greenwood, spotted Geoff's talent as a striker and moved him to centre forward, the position he was to play for his entire football career. Early in 1966, Alf Ramsey named Geoff in the England line-up and included him in the squad that was to compete for the World Cup in July of that year. The 17th July was to be a pivotal moment in Geoff's career, and his life, when he famously became the only man to score a hat trick in a World Cup Final. His place in the history of football was assured and he remains one of the most sought-after sports personalities in the world.

Continuing his club career with West Ham until 1972, Alf Ramsey selected Hurst as his first-choice in the attack for six years between 1966-1972, the longest run of any forward during his time as manager. During this time, Geoff became one of the highest paid footballers in the UK.

After finishing his playing career with Stoke City, West Brom and the Seattle Sounders, Geoff moved into a management career initially as assistant to his ex-West Ham boss, Ron Greenwood. A player-manager role at Telford United followed in 1977 and from 1979-1981 Geoff took up the position of manager at Chelsea.

However, Geoff eventually made a huge decision - he left the world of football and joined the world of business. With no experience of the commercial world, Geoff went on a course to learn the basics of selling and gain a knowledge of his new product, insurance. Over the next 20 years, Geoff was to build a successful career in the insurance business before retiring in 2002. Today, Sir Geoff is asked about the World Cup on a daily basis but there was a gap of 15-20 years between his football career and the reverence for the achievements of the 1966 England squad.

After dinner and motivational speaking are popular career choices for sporting icons but it's difficult to transcend the divide between sporting excellence and speaking excellence. Sir Geoff Hurst crosses that divide and has established himself as a popular guest at corporate, private and charity events.

Drawing on the similarities that exist between sport and business to motivate and inspire, Sir Geoff recognises his own skills in not only seeing opportunities but preparing for them and making the most of them!

Highly entertaining and filled with a career's worth of anecdotes, Sir Geoff Hurst captivates his audience and leaves many with an experience that will not be forgotten - not for the first time in his life! As a true sporting hero with a unique achievement, Sir Geoff Hurst consistently receives standing ovations from his audiences.

Sir Geoff was arguably the most balanced guest we have ever had. His professionalism and personal humility was a paradoxical mix that won the greatest respect of everyone there. Coupled with this was his ability to converse on topics at the highest level, whilst knowing when to revert to boyish humour. A truly outstanding individual.

It has been a real pleasure working with Sir Geoff throughout the year. His dedication to the cause and willingness to get involved has been invaluable and will be a hard act to follow for any future presidents.

Geoff and I have been friends ever since the 66 World Cup and worked together over the years. When he came on my theatre show a couple of times this year he was one of the very best guests we have ever had. Funny and intelligent at the same time and extremely good when meeting the fans. I'd love to work more with him in the coming years before we both get too old. He's truly a delight to work with and a great bloke as well!

Working with Geoff Hurst was an absolute pleasure. On camera, Geoff was very natural and engaging and delivered exactly what was needed. Throughout the shoot he was charming and a true professional. It's not every day that you get to work with a World Cup winner and working with Geoff was a real joy.

How to book Sir Geoff Hurst MBE for your event