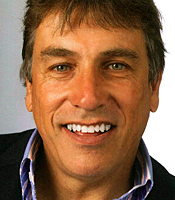 As well as his principal role as BBC's face of rugby, John Inverdale has covered almost all the major sporting events for television and radio. After fronting rugby and football World Cups, and Wimbledon, he added rowing to his list at Beijing – and covered athletics for London 2012.

John has anchored Grandstand and Rugby Special, hosted John Inverdale's Football Night, the sports chat show On Side and tennis grand slams for ITV. He has also presented the popular drive-time show on Radio 5 Live and several series of the World's Strongest Man.

A wonderfully relaxed and dry-humoured presenter, John has been named Sony Broadcaster and Radio Personality of the Year. He is an outstanding, professional and humorous after-dinner speaker, and host MC of any sporting event (and otherwise). He is actively involved with Sport Relief and in his spare time serves as Director of Rugby at Esher RFC and President of Lincoln City Supporters Club.

How to book John Inverdale for your event