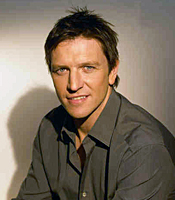 Lee Sharpe's boundless charm and keen sense of humour coupled with his natural ability in front of the camera, never fail to catch attention and he is now in high demand as a guest, presenter, interviewee and celebrity contributor across all media platforms and genres.

One of the biggest names in football during the nineties, Lee Sharpe is still recognised by many as one of the finest players of his generation. He thrived under the management of Alex Ferguson and kept the likes of Ryan Giggs in the shade for many years. At the time, his popularity with legions of fans was unparalleled.

Today Lee Sharpe is enjoying great TV success as a football pundit for the BBC, working on Score, Football Focus and Match of the Day 2 both as a live studio guest and as a features reporter. His presenting skills are also being put to good use on Bravo where he fronted a documentary on Football Hooliganism.

In 2005, Lee famously decided to put himself to the test and joined a host of gorgeous male and female celebrities in Fiji to take part in ITV's Celebrity Love Island. The public chose Lee to be in the final four narrowly missing the winning spot to be one half of the nation's favourite couple.

Also during his off field career he has featured on the pages of both top consumer and sports magazines. Lee Sharpe has made the transition from teen idol to credible and popular ambassador for sponsors and brands, television presenter and broadcaster, whilst not losing any of his inimitable humour and charm.

Clients often ask about purchasing books for giveaways and delegate packs. Below you’ll find a selection of products by Lee Sharpe. Click the images to view on Amazon's website. For bulk orders, please speak with your Booking Agent.

How to book Lee Sharpe for your event