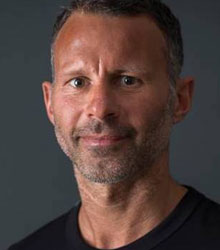 With a record 34 career trophies to his name, Ryan Giggs is celebrated as the most decorated player the English Premier League has ever produced.

A product of the infamous Manchester United Class of 92, Ryan went on to amass 693 appearances for the club, winning 13 Premier League titles, 2 UEFA Champions Leagues, 4 FA Cups, 9 FA Community Shields, a FIFA Club World Cup and was an integral part of the historic treble winning side of 1998/99.

Ryan has made more appearances and won more honours than any other player in Manchester United’s illustrious history and in February 2018 was appointed the manager of the Wales National Team.

Twice awarded with the prestigious PFA young player of the year award, Ryan Giggs was capped 66 times for the Wales National Team between 1991 and 2007, and in 2012 was named captain of the Team GB football team for London 2012.

Following retirements from playing professional football in May 2014, Ryan Giggs’ attention turned to coaching and was appointed assistant manager at Manchester United enjoying success alongside Louis Van Gaal winning the 2014/15 FA Cup. He also co-owns Hotel Football with The Class of 92, George’s restaurant in Manchester as well as the successful Salford City FC, who have been promoted 3 times in 4 seasons He also became a Laureus academy member.

Ryan Giggs has certainly cemented his place in history for both Wales and Manchester United.

Ryan Giggs is a very popular choice for football after dinner events and personal appearances.

Available for meet and greet opportunities and ribbon-cutting events, Ryan is also very popular for after dinner Q&A, hosted by a suitable presenter or facilitator.

To an attentive audience, Ryan discusses some of the great moments and memories from his extensive sporting career. One of Ryan’s earliest memories as a teenager and young player was of Alex Ferguson — prior to becoming ‘Sir Alex’ — visiting his house to sign him – the only problem was, Ryan had gone out because he thought it was a wind-up!

He also shares many of the highlights of his astonishing playing career, including “that famous night in Munich” in 1999, when the Reds scored two goals in the last few minutes to clinch an unlikely Champions League title having been dominated by a brilliant Bayern Munich for most of the game.

With 13 League titles to his name it’s difficult to talk about all of them, however Ryan will regale his audience with a few of his favourite triumphs!

Giggs also delves into his international playing career, and his pride playing for Wales, plus of course managing Manchester Utd at Old Trafford.

Clients often ask about purchasing books for giveaways and delegate packs. Below you’ll find a selection of products by Ryan Giggs OBE. Click the images to view on Amazon's website. For bulk orders, please speak with your Booking Agent.

How to book Ryan Giggs OBE for your event