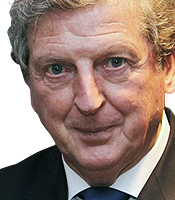 Roy Hodgson is the former England football team Manager who, in his career to-date, he has managed sixteen different teams in eight countries.

Roy Hodgson was born in Croydon and played for Crystal Palace Youth Team as a moderately successful player. After leaving Crystal Palace he played non-League football for several years with Tonbridge Angels and Gravesend & Northfleet.

At the age of 23, he completed training to become a fully qualified coach and joined Maidstone United, where he played and also served as Assistant Manager. In 1972, after a year at Maidstone, he moved to Ashford Town while also working as a PE teacher in south London. In 1974 he had his final outing as a player, joining Carshalton Athletic in Surrey.

Roy began his 36-year career as a Manager with Swedish club Halmstad in 1976. Roy had three years in charge of Switzerland, guiding them to the last 16 of the 1994 World Cup in America and taking them to the Euro ‘96, though he had left before the Finals. The Swiss hadn't qualified for a major tournament since the 1960s before his guidance of them.

Roy then spent a year with Finland, lifting them to their highest FIFA ranking, and two years with the United Arab Emirates. At club level Roy managed top clubs like Internazionale and Udinese, Blackburn Rovers, Malmo, FC Copenhagen and Grasshopper. After his spell with the Finnish national side Roy became an English Premier League manager with Fulham in 2007.

Roy Hodgson took the Cottagers to the UEFA Europa League Final in 2010, emulating his achievement of leading Inter to the UEFA Cup Final of 1997. In the same year the League Managers' Association chose him as their ‘Manager of the Year'. He took over at Liverpool in June 2010 but had switched to West Bromwich Albion by February 2011, keeping them in a mid-table position in the Premier League this season.

Roy Hodgson was appointed England Manager on 1 May 2012 on a 4-year contract. After Fabio Capello resigned, it had been widely reported in the British press that Harry Redknapp was favourite for the position. However, the FA Chairman stated that, despite there being a shortlist of candidates, Roy Hodgson was the only person approached for the position. He became England's 13th permanent Manager and England is the fourth national team he has managed.

Roy served several times as a member of UEFA's technical study group at the European Championships and was also a member of the FIFA technical study group at the 2006 World Cup. He speaks five languages - in addition to English, Roy speaks fluent Norwegian, Swedish, German and Italian, as well as partial Danish, French and Finnish - and has worked as a television pundit in several of the countries in which he has coached.

How to book Roy Hodgson for your event