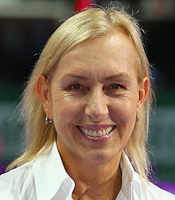 Martina Navratilova, tennis player extraordinaire, took women's tennis to a new level with her speed, determination and agility. She won the Wimbledon women's singles title a recordninetimes and has been described by many as "the greatest singles, doubles, and mixed doubles player who's ever lived".

In all, Martina has won 18 Grand Slam singles titles, 31 Grand Slam women's doubles titles (an all-time record), and 10 Grand Slam mixed doubles titles; in total she has won 59 Grand Slam titles. She still plays at all the Grand Slams where she takes part in the legends doubles.

Martina has been described as honest, feisty, self-deprecating, courageous, controversial and a Rennaisance woman. She's always told it from the heart, never flinching from an unpopular comment or cause if she believes it to be right. She is a global icon for lesbian and gay rights and is, as she
describes it herself, a citizen of the world. In 2014 Martina married her long-time partner Julia Lemigova. They live in Miami with their two daughters and many animals.

Originally from the Czech Republic, Martina was stripped of her citizenship when, in 1975 at the age of 18, she asked for political asylum in the United States. She became a US citizen in 1981 and also had her Czech citizenship restored in 2008.

In 2006, she wrote ‘Shape Your Self’ - a guide to health and fitness. In 1985 Martina released an autobiography, co-written with New York Times sports columnist George Vecsey, titled 'Martina' in the US and‘Being Myself' in the rest of the world. In 1982 she has alsoco-written a tennis instruction book with Mary Carillo titled 'Tennis My Way'. She later co-wrote three mystery novels with Liz Nickles: ‘The Total Zone’ (1994); ‘Breaking point’ (1996); and ‘Killer Instinct’ (1997).

Martina now spends her time between beingat home and broadcasting as a presenter/commentator for the BBC, Tennis Channel and BT Sport. She also travels the world extensively giving speaking engagements on a variety of issues and taking part in other corporate activities.

Clients often ask about purchasing books for giveaways and delegate packs. Below you’ll find a selection of products by Martina Navratilova. Click the images to view on Amazon's website. For bulk orders, please speak with your Booking Agent.

How to book Martina Navratilova for your event

To book Martina Navratilova, please submit an online enquiry, email bookings@nmp.co.uk or speak with one of our booking agents on +44 (0)1372 361 004.