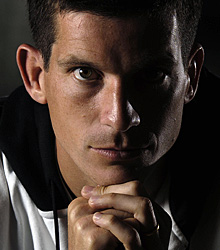 Tim Henman, first began to play tennis at the age of 3 and by 5 he had already decided that he wanted to make tennis his career.

That year, 1996, was to be Tim’s his breakthrough year, with him becoming British No 1. He reached the quarterfinals of Wimbledon and the semi-finals of 6 ATP tournaments.

A seemingly perennial Wimbledon Semi finalist, Tim can boast the most effusive patriotic support in all of tennis. An unassuming individual, Tim Henman is wonderfully articulate when talking about his glorious career to date.

How to book Tim Henman for your event