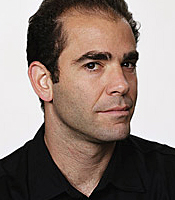 Growing up in Palos Verdes, California, Pete Sampras started playing tennis at the age of 7 and grew up idolizing the play of the great Rod Laver. By age 11, Pete would have the chance to practice with his idol.

Under the tutelage of early coach Pete Fischer, Pete made a name for himself as an up-and-coming star while competing in the juniors against the likes of David Wheaton, Andre Agassi, Jim Courier, and Michael Chang. Fischer would play an instrumental role in Pete's future success by switching his backhand from a two-handed to a one-handed, and by turning Pete Sampras into a serve-and-volleyer from a baseline player.

Pete Sampras has gone onto win more Grand Slam titles than any other men's player in tennis history, and held the year-end No.1 world ranking for a record six consecutive years (1993-1998).

Clients often ask about purchasing books for giveaways and delegate packs. Below you’ll find a selection of products by Pete Sampras. Click the images to view on Amazon's website. For bulk orders, please speak with your Booking Agent.

How to book Pete Sampras for your event