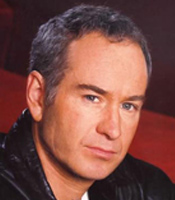 Popular as much for personal appearances as he is for after-dinner speaking, commentating and awards hosting, world-class tennis ace John McEnroe really embodies the American spirit. For two decades, he set an unparalleled standard of excellence both on and off the court. His pursuit of perfection and intensity to win have made him a popular champion and a tennis legend for the ages.

John McEnroe's knowledge of the game, honest analysis and magnetic personality have made him an instant hit as a television commentator for CBS, NBC and USA, to name just a few. A man with many interests outside of tennis, he oversees The John McEnroe Gallery in New York City and is also an accomplished guitarist. As a father of five, John also won another title - the 1996 National Father of the Year Award.

For over 20 years, John McEnroe has shown what it takes to be a success both on and off the court. His amazing life is proof positive that being passionate about your every endeavour will guarantee success.

Clients often ask about purchasing books for giveaways and delegate packs. Below you’ll find a selection of products by John McEnroe. Click the images to view on Amazon's website. For bulk orders, please speak with your Booking Agent.

How to book John McEnroe for your event