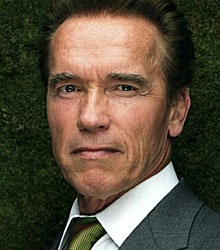 Arnold Schwarzenegger is one of the most recognised individuals on the planet, having led an amazing life and achieving beyond his dreams in Hollywood, fitness, and public service.

The world-famous athlete, actor and politician was born in Thal, Austria, in 1947 and by the age of 20 he was dominating the sport of competitive bodybuilding, becoming the youngest person ever to win the Mr. Universe title.

By generating a new international audience for bodybuilding Arnold Schwarzenegger turned himself into a sports icon.

With his sights set on Hollywood, he emigrated to America in 1968 and went on to win five Mr. Universe titles and seven Mr. Olympia titles before retiring to concentrate on acting.

Schwarzenegger, who worked under the pseudonym Arnold Strong in his first feature, Hercules in New York, quickly made a name for himself in Hollywood. In 1977, the Hollywood Foreign Press Association recognised him with a Golden Globe for New Male Star of the Year for his role in Stay Hungry opposite Sally Field.

His big break arrived in 1982, when Conan The Barbarian hit box office gold — however, it was the 1984 epic sci-fi Terminator that catapulted him into cinema history. He most certainly would ‘be back’!

To-date his films have grossed over $3 billion worldwide.

Having achieved fame as a bodybuilder and Hollywood action hero in the 1980s and 90s, the 00s saw Arnold Schwarzenegger set his sights on American politics, becoming California's 38th Governor and serving two terms between 2003 - 2011.

During his tenure as Governor of the world's eighth largest economy, he put the state at the forefront of the nation in addressing the issue of climate change and taking action by signing the Global Warming Solutions Act of 2006. He pushed for the development of renewable energies; rebuilt critical infrastructure and ensured better health care reforms.

Since leaving office, Arnold Schwarzenegger co-founded the R20 Regions of Climate Action, a global non-profit dedicated to helping sub national governments develop, implement, and communicate the importance of low-carbon and climate resilient projects as well as their economic benefits. In December 2012, he was recognised as a 2012 Global Advocate by the United Nations Correspondents Association for his work with the organisation.

Most recently Schwarzenegger has combined his love of global issues and entertainment, to serve as executive producer and correspondent on Showtime’s climate change docu-series, Years of Living Dangerously, which debuted in 2014.

As a businessman, Arnold's first investment was in a bricklaying business. He followed this with a mail-order bodybuilding equipment company and invested in real estate, becoming a millionaire before he started his acting career. He was a founding investor in the Planet Hollywood restaurant chain.

A hugely inspiring and charismatic speaker, Arnold Schwarzenegger envisages the goals he wants to achieve then does whatever it takes to make it reality. And he has a unique ability to talk to anyone with persuasion, respect and on equal terms.

He doesn't care about critics or nay-sayers. He focuses on believing in himself and using his immense work-ethic, strong self-discipline and determination to accomplish his goals. "Strength does not come from winning. Your struggles develop your strengths. When you go through hardships and decide not to surrender, that is strength”.

In Arnold's speeches, he discusses how success can be difficult to obtain, but you have to be stubborn and willing to conquer any obstacles you encounter.

He shares the four principles that have underpinned his success: have a vision and trust it; break the rules; don't be afraid to fail; and work hard - there are no shortcuts.

Will Innovation & Green Technologies Save The Global Economy?
From his experience in politics to his efforts combating climate change, Arnold Schwarzenegger incarnates openness to change and the boldness of innovative solutions.

Arnold’s legacy is a California that is a world leader in renewable energy innovation, technology development and deployment. He discusses the need to shift the debate on energy from a singular focus on carbon emission reduction, and instead urgently develop an American energy strategy.

He identifies security and the over-reliance on foreign oil; the need to address pollution more generally; and the importance of energy productivity, green jobs and technological innovation as the primary objectives of such a strategy.

Everything went great! We probably had almost 900 people in the Opening for Gov. Schwarzenegger's speech – which is phenomenal! The room was full, both sides of the balcony were full, it was just excellent! All of the comments we've received so far have been nothing but kind – they all said he was an excellent speaker with an excellent message.

Clients often ask about purchasing books for giveaways and delegate packs. Below you’ll find a selection of products by Arnold Schwarzenegger. Click the images to view on Amazon's website. For bulk orders, please speak with your Booking Agent.

How to book Arnold Schwarzenegger for your event

To book Arnold Schwarzenegger, please submit an online enquiry, email bookings@nmp.co.uk or speak with one of our booking agents on +44 (0)1372 361 004.