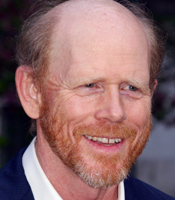 Academy Award-winning filmmaker Ron Howard is one of the film and television world's most enduring legends, with over fifty years in the entertainment industry as producer, director, writer and star of some of the seminal works of his generation.

As partner in Imagine Films Entertainment, he has led the company's creative team to such box office hits as Rush, The Da Vinci Code, How the Grinch Stole Christmas and Cocoon. Howard has also earned multiple awards for such prestigious motion pictures as Frost/Nixon, Cinderella Man, A Beautiful Mind and Apollo 13.

The Producers Guild of America gave Howard and Grazer their Milestone Award in January 2009. Howard's other honors include, the Big Apple Award from NYU's Tisch School of Cinematic Arts in 2009, the Simon Wiesenthal Center's Humanitarian Award in 2010 and the Chicago Film Festival's Gold Hugo Career Achievement Award in 2010. The Museum of Moving Images honored him in 2005 and the American Cinema Editors in 2006. He most recently received the U.K.'s Empire Magazine Most Inspirational Award.

Howard has served as an executive producer on a number of award-winning television shows, such as the HBO miniseries From the Earth to the Moon, Fox's comedy Arrested Development, which he narrated, and NBC's Parenthood. He also executive produced the hit children's series Curious George. In 2013, after a seven-year hiatus, the Emmy-winning series Arrested Development returned with a fourth season exclusively on Netflix. Howard served as producer and narrator for the series.

Howard and long-time producing partner Brian Grazer first collaborated on the hit comedies Night Shift and Splash. The pair co-founded Imagine Entertainment in 1986 to create independently produced feature films Friday Night Lights and 8 Mile and television programs 24, Felicity and Parenthood. Up next, they will release the feature film In the Heart of the Sea, based on Nathaniel Philbrick's book chronicling the journey that inspired Herman Melville's classic novel Moby-Dick.

Howard began his career in film as an actor, first appearing in The Journey and The Music Man, then as ‘Opie' on the long-running television series The Andy Griffith Show. Howard later starred in the popular series Happy Days.

Clients often ask about purchasing books for giveaways and delegate packs. Below you’ll find a selection of products by Ron Howard. Click the images to view on Amazon's website. For bulk orders, please speak with your Booking Agent.

How to book Ron Howard for your event