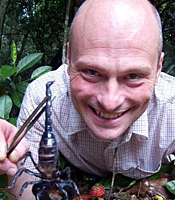 Dr Mike Leahy presents Sky One's "Invasion of the Bodyscratchers" where he grew parasites on himself, and "Bodysnatchers" for BBC1 where he grew a tapeworm in his own body. He also filmed an eight-part series for National Geographic Channel/Travel Channel, 'Bite Me with Dr Mike Leahy'. The series has seen him travel from Ho Chi Minh to Alice Springs encountering nature's weird and wonderful creatures along the way.

Mike Leahy has a BSc in Ecology plus 1st Class Hons and a DPhil (doctorate) from Oxford University in Virology and Molecular Biology, however he initially left school early, on bad terms, and with few qualifications. He was a motor vehicle mechanic for ten years before leaving work to study for a degree in ecology, which explains his interest in motoring. After completing his DPhil, he worked as a virologist and microbiologist, both of which involved an element of parasitology. Most of his research was conducted at Oxford University, although he also worked overseas for short periods.

In addition to TV work, Mike has written for 'Land Rover Owner' magazine, the broadsheet educational supplements, 'NERC News', 'MG Enthusiast', 'Mountain Biking UK', 'Second Hand Bike', 'Motorcycle Sport and Leisure' and educational publications for the Open University. He has published twelve papers in the academic press and together with his wife (who was a journalist for 'The Times') he is currently working on two manuscripts including a book about travelling abroad with infants.

Mike loves travel, has traditionally worked in exotic, adventurous (or downright rough) locations and in the course of his work has visited, worked or travelled in about forty countries. He has an encyclopaedic knowledge and awareness of a range of scientific topics, but is particularly enthusiastic about emerging diseases, the synthesis between 'conventional' and 'complementary' medicine, virology, microbiology, parasitology, and diseases / healthcare in the developing world. He has always been a 'petrol-head' and is fascinated by the social history of the motor car and excited by adventure motorcycle touring.

Mike travels a lot (usually by motorcycle). He races dirt bikes and has a black belt in Taikwondo. He owns a TVR which inevitably means regular maintenance and repair work which (surprisingly) he very much enjoys!

Mike lives in the Cotswolds and on the west coast of Scotland.

How to book Dr Mike Leahy for your event