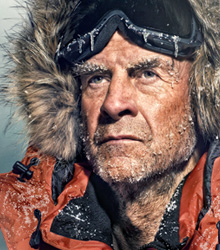 Sir Ranulph Fiennes is, according to The Guinness Book of Records, The World's Greatest Living Explorer and the Daily Telegraph listed Ranulph Fiennes as “One of the world's top ten speakers”. That was back in 1984, and since then he has broken many more world records and led many more expeditions to the most remote regions of our planet.

He is the first person ever to have climbed Mount Everest and crossed both Antarctica and the Arctic Ocean via the Poles.

Born in 1944 and educated at Eton, Sir Ranulph served with the Royal Scots Greys before joining the elite SAS. In 1968, he joined the Army of the Sultan of Oman and in 1970 was awarded the Sultan's Bravery Medal. In the same year he married his childhood sweetheart, Virginia, who, in 1987, became the first woman to be awarded the Polar Medal. She passed away in 2004.

'Look for a brave spirit' is the Fiennes family motto - a thousand years of courageous and resourceful ancestors, traceable directly through 48 generations to Charlemagne, live on in Sir Ranulph Twisleton-Wykeham-Fiennes Bt.

Sir Ranulph has led over 22 major expeditions to remote parts of the world. In 1982, the Transglobe Expedition accomplished the first surface polar circumnavigation of Earth, having taken seven years to plan and three years to complete.

Sir Ranulph Fiennes and Charlie Burton were the first men to reach both poles. Fascinated by the legends of the Lost City of Ubar, described by Lawrence of Arabia as the Atlantis of the Sands, Ranulph Fiennes led several expeditions in the great deserts of Arabia, before finally finding the city in Oman in 1992.

In 1993, Sir Ranulph and Dr. Mike Stroud completed the first entirely unassisted polar journey across the Antarctic Continent, the longest polar journey in history. For ninety-seven days the two men fought pain, starvation and snow-blindness, dragging 500-pound sledges across the frozen roof of the world. Their physical struggle against the elements soon turned into a psychological and mental struggle between the two explorers.

In 1993, Sir Ranulph was awarded an OBE for 'human endeavour and charitable services', and in 1995 was unique in being awarded a double clasp to his Polar Medal in recognition of his outstanding achievements in Polar exploration. Other honours include the Sultan of Oman's Bravery Medal, the Founder's Medal of the Royal Geographical Society and the New York Explorer's Club Gold Medal.

To-date, Sir Ranulph Fiennes has raised over £18.9 million for different UK charities including the Multiple Sclerosis Society, Breakthrough Breast Cancer, the British Heart Foundation and Marie Curie. He has been named in 2011 as the UK's top fundraiser by JustGiving, the UK's most popular online fundraising platform, and has raised more than any other celebrity fundraiser featured on JustGiving.com during the same period. To-date he has raised £8.3 million for Marie Curie alone.

Sir Ranulph Fiennes is one of the world’s most sought-after, inspiring and captivating speakers; entertaining audiences globally at conferences and dinners with his breathtaking stories of endurance, perseverance and sheer determination. And delivered in the most modest, humble and subtly humorous style that is characteristically Ranulph.

His speeches — effortlessly woven together stories of unique and often treacherous expeditions — draw the parallels between Ranulph’s world and ours. Teamwork, determination, patience, discipline and creative thinking are all critical in expeditions; we may not risk our own lives in the same way, but the parallels are clear even in less hazardous occupations. He draws a clear connection between nature's most dangerous and difficult challenges, and the day-to-day hurdles we all face.

Sir Ranulph Fiennes explains the challenge of raising £40 million in sponsorship, finding the right volunteers and planning complex journeys beset by political, personal, geographical, financial and physical obstacles. To him, building a team with the right balance of character and attitude is paramount. Persistence, tolerance, fitness, agility and the ability to perform under extreme pressure are all factors in Ran's remarkable endeavours as they are in any competitive environment.

Popular themes in Sir Ranulph Fiennes’ speeches include:
• Mind Over Matter
• Challenges
• Teamwork
• Living Dangerously - A Life of Adventures
• Nothing Is Beyond Your Reach
• Personal Motivation and Determination
• To the Ends of the Earth - Setting New Standards for Achievement

Absolutely fabulous and inspiring... could have listened to Sir Ranulph Fiennes all day. Thank you for giving me the opportunity to listen to such a legend.

Sir Ranulph Fiennes' presentation was extremely entertaining, witty, inspiring, thought provoking and humbling, the best speaker we have ever had and will find it difficult to follow next year!

Thank you again for making the evening so memorable, not only for myself but for the 590 people in attendance on the night, the feedback was overwhelmingly positive.

I cannot recommend Sir Ranulph Fiennes highly enough to anyone looking for a speaker. Not only is his subject matter interesting and entertaining, but his delivery is fabulous. And he is, of course, a delight to work with. Ran spoke for 50 minutes, plus Q&A, and was a great hit with the audience. And he spent time afterwards signing lots and lots of books – before his long drive home.

A truly amazing evening. Sir Ranulph Fiennes not only left our guests in tears of laughter, but moreover inspired by his unparalleled, motivational spirit.

Thank you from all of us at Thomson Reuters for a very inspiring talk. We’ve had a lot of good feedback from the delegates. Personally, I really enjoyed the chance to get to meet you.

I wanted to thank you personally for such an outstanding contribution to what became a hugely successful Conference. You have the unique gift to motivate and inspire people to push themselves to the limits.

Ranulph Fiennes was fantastic and the audience were engrossed with his speech the entire time, he was inspiring, witty and really engaging and we had great feedback from our guests on the evening. He really has set the standards for next year’s event

Clients often ask about purchasing books for giveaways and delegate packs. Below you’ll find a selection of products by Sir Ranulph Fiennes OBE. Click the images to view on Amazon's website. For bulk orders, please speak with your Booking Agent.

How to book Sir Ranulph Fiennes OBE for your event