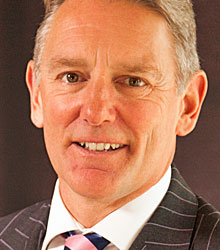 Neil Laughton is a former Royal Marine commando, helicopter pilot and SAS officer turned successful business entrepreneur who has navigated the complexities and challenges of a rapidly changing world as a military, business and expedition leader.

He has won multiple business awards, various adventure world records and was formally recognised by the Royal Geographical Society for his "Leadership and encouragement of others to reach their potential”. One of the businesses he founded grew to £40m turnover and was bought by a FTSE 100 in 2011.

Neil is currently Managing Director of Laughton & Co (an experiential training and development company) Chairman of the Scientific Exploration Society and Captain of the England Penny Farthing Polo Team.

Neil is passionate about travel and adventure and he has organised and led more than 50 expeditions on 7 continents, by land, sea and air. He has completed the Explorers Grand Slam – climbing the highest mountain on each continent and skiing to both Poles.

He summited Mount Everest with Bear Grylls, was the first person to circumnavigate the UK and Ireland on a jet ski and he piloted the world's first road legal flying car on a 10,000 km journey from London to Timbuktu.

In 2017, he paddle-boarded around Easter Island in the Pacific Ocean, 2018 saw him host the world's highest black tie dinner party at 23,000ft on Mt Everest and in 2019 he rode 874 miles from Lands End to John O'Groats on a Penny Farthing bicycle whilst raising over £100,000 for three charities – Rockinghorse, Community Action Nepal and Mary's Meals.

Neil Laughton is an experienced keynote motivational speaker who engages, entertains and inspires audiences around the world. He was the keynote speaker at a Fitness First business conference comprising 2,000 fitness centre managers and he has spoken at conferences and training events for leading organisations including Accenture, Bank of England, British Airways, BT, Coca Cola, McKinsey & Co, Mercedes Benz, TEDx and Xerox.

In summary, Neil Laughton inspires people to think big, feel confident and to act like champions.

Neil Laughton is an experienced keynote conference speaker and enjoys sharing his military, business and adventuring experiences with audiences around the world.

Organisations today have many challenges to deal with... an ever-changing commercial landscape, never ending financial pressures and often low-level employee or staff engagement - and these are to name but a few.

The solution to these issues and indeed to prosper whilst coping with other responsibilities such as to the environment, social and governance, requires inspirational leaders at many levels in your organisation and to deliver exceptional team performances.

This is achieved by everyone developing a more entrepreneurial and adventurous mindset, adopting good leadership and team-working principles and building a culture of trust & respect. We call this ‘Team Leadership’.

Neil is an inspirational speaker. He has a fascinating story to tell and draws lessons from both success and failure.

Inspirational was a word used often to describe your talk on our evaluation forms.

Fantastic! What a great talk and the feedback has been sensational!

Full on, insightful and first class

Neil brings something that’s truly fresh and innovative. Prepare to be invigorated, to feel stretched and to learn a whole lot more about leadership than a PowerPoint or the classroom will ever teach you.

The session has clearly resonated with the team, given them a common language to explore relationships and there is a high level of interest and “buzz” in the office.

How amazing, interesting and inspiring your session was and how mad you are to have attempted the things you have done!

How to book Neil Laughton for your event