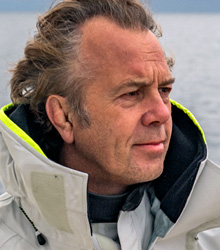 In May 2003, Pen Hadow was catapulted to international fame when he became the first person in history to sledge alone from Canada to the North Geographic Pole without any outside help - a feat of endurance thought to be harder than climbing Everest solo, without oxygen. It had taken him three attempts and fifteen years' dedication to achieve his goal, and despite severe setbacks, he walked, skied and swam for two months to fulfil a lifetime's dream.

Pen was educated at Harrow, where he was head of house, head of school, head of rugby, football and athletics, and where he achieved his first feat of endurance: completing a school marathon at the age of 15, the first time that any boy had attempted the course for exactly fifty years, and now an annual fixture for the school.

Then came his 'wilderness' years, when he struggled to resolve how best he could fulfil his potential, and, once he had set his heart on the polar regions, and the North Pole in particular, struggled even more to finally achieve his dream.

Pen read Geography at University College London, and went on to become the youngest-ever executive at Mark McCormack's renowned International Management Group, where he was more focused in helping others achieve rather than himself.

Pen Hadow leads the not-for-profit 90º North Unit which advocates for an international agreement to create a protected area for the international waters of the Arctic Ocean; and he is director of the annual scientific research and public engagement programme, Arctic Mission, which supports the Unit’s work.

The 90º North Unit is introducing a significant new perspective on the Arctic’s diminishing sea ice, revealing that the environmental issue is less about the geophysics of a melting layer of frozen sea water, and far more about the potentially catastrophic loss of a globally unique “floating ice-reef ecosystem” which includes some of the world’s most iconic species.

In 2017, Arctic Mission sailed two 50’ yachts into the North Pole’s international waters, the first non-icebreaking vessels in history to do so, to demonstrate the increasing accessibility of these waters to surface commercial shipping, fishing, tourism and mining, and therefore the emerging human threat to the wildlife already stressed by its reduced sea-ice cover habitat.

Pen Hadow's defining quality is his natural ability - and passionate commitment - to bridging the divide between the speaker and his audience, to convince his audience that if even he can achieve what he sets out to do, then there's no reason why they cannot do the same - it's all about what goes on in your head.

Every one of Pen Hadow's speeches is thoughtfully prepared according to the client's brief, whether it’s an intimate, informal and light-hearted after dinner presentation about polar bear stories; a motivational keynote talk with high impact images and modern AV support; or a day of workshops.

Pen’s speeches are designed to make an impact, the occasion determining the balance between information, inspiration and entertainment. They are always thought-provoking.

His environmental keynotes, motivational addresses, and after-dinner talks offer his hard-won insights from a life as a leading polar explorer. He has many years of experience on the international speaking circuit, and his engagements have included heads-of-state summits, international conferences, national forums and corporate events across the UK, Europe, Asia and North America.

And his solo North Pole feat continues to provide the framework for a riveting motivational experience focused on high performance in the most challenging circumstances – and most especially, achieving More With Less resources in a challenging environment, something the strategies and tactics he developed for his solo trek illustrates powerfully.

Hadow is only person to have succeeded in making a solo journey from Canada to the North Pole – the feat remains unrepeated. It took him three attempts over 15 years to achieve this single feat at the ‘bleeding edge of exploration’.

The keys to success revolved around a 360º approach to multiple innovations, mental resilience techniques, and emotional management strategies – all of which are applicable to enhancing performance in the workplace. His eventual success is a story of extreme performance against previously insuperable odds.

Pen can talk with insight and genuine authority about personal motivation, effective teamwork, and leadership techniques, to support the people in any organisation in realising their individual potential and achieving their team missions.

Keynote speeches:
• Reaching Goals Against the Odds and in the Most Challenging Environments
• What Does the North Pole’s Dwindling Sea Ice Tell Us About Our Changing World
• Having been World’s Most Resource Efficient Person for 75 Days
• Going Further with Less, Achieving More with Fewer
• The Natural Environment & Corporate Reputation

After-dinner talks:
• Top Tips to Defend Yourself Against Polar Bears
• Just What It Took – Solo to the North Pole
• Anecdotes from a Life as a Polar Guide & Explorer
• An Evening With Pen Hadow
• The Value & Future of Exploration
• What Arctic Sea-ice Loss Tells Us
• Things You Never Knew about Polar Exploration … The Physiology, The Psychology & The Hardest Bits

Whatever the subject, wherever the venue, and whoever his audience; Pen Hadow will hold the audience in his thrall. Pen naturally engages an audience and effortlessly inspires them, directly relating the experiences he has endured out on the ice to the challenges he knows all too well are presented by the equally challenging work environment. Question time is his forte, when he can enjoy direct interaction with guests.

Please will you pass on our Thanks to Pen for delivering a great presentation at our Volvo Trucks Dealer Conference earlier this week at The Belfry.We have received very positive feedback from our delegates regarding the conference and many comments were made confirming that Pen’s message was very well received and aligned with the overall conference theme.Thank you to you too for helping us to liaise with Pen, your involvement really helped to secure Pen’s alignment with our conference.

Pen Hadow went down very well when he was here speaking to our client…our major clients were blown away by his achievements, it was a great lunch and real pleasure to meet Pen and I am grateful to him for giving up the time to honour this commitment.

Pen Hadow gave an inspirational talk and captured the full attention of an audience that is notoriously critical of public speakers! He was amusing, stimulating, informing and uplifting and is clearly a man for whom the word 'impossible' does not exist! I would thoroughly recommend him to any audience that wished to be inspired and Savills will undoubtedly utilise his services again in the future.

Pen Hadow was magnificent. What a privilege it was for me and my colleagues to have you with us last Friday, sharing your extraordinary experiences and inspiring us to tackle life with the joyous enthusiasm you emanate. I was not at all surprised to learn from the feedback forms that your presentation was the highlight of the two days – so many memorable images and inspirational moments to take home with us.

You have a gift – and you should use it. Few can communicate with a level of engagement and intensity like that

Pen was amazing, just amazing, richard was extremely impressed with his presentation and Pen himself. I thought he was utterly charming and a real gentleman, he was an outstanding speaker and we have received many compliments on his presentation. It was a real pleasure to meet him. Thank you both so much.

Pen Hadow's experience was genuinely inspirational and motivating. Having launched Marks and Spencer's Plan A initiative on the need to tackle the enormous challenge of climate change, it was fantastic to hear from someone who has experienced global warming issues with their own eyes.

Clients often ask about purchasing books for giveaways and delegate packs. Below you’ll find a selection of products by Pen Hadow. Click the images to view on Amazon's website. For bulk orders, please speak with your Booking Agent.

How to book Pen Hadow for your event