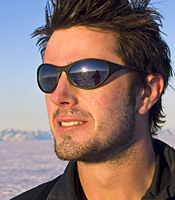 Alex Hibbert is a world-record holding polar expedition leader and photographer. He has already spent over one hundred and sixty-five days unsupported in the Arctic and has crossed the second largest icecap on Earth four times.

At aged only twenty-five, Alex was the world-record holder for the longest unsupported arctic journey in history. Amongst numerous other journeys, he hauled a 430lb sledge 1,374 miles over 113 days through tough arctic terrain and without support of any kind. A modern-day pioneer and Oxford graduate, Alex is highly dynamic and combines youth with strong academic credentials. This makes him uniquely placed to deliver tailored and meaningful messages to audiences ranging from graduate intakes to senior executive boards. Alex is as comfortable recalling moments when immense mental and physical robustness were called for, as he is providing relevant insight and intellectual commentary.

Alex Hibbert grew up in Hampshire, was educated in Dorset and read Biology at the University of Oxford. In 2002, aged fifteen, Alex was one of the youngest people to complete the 125-mile Devizes to Westminster kayak ultra-marathon. At university he competed at the Oxford-Cambridge Varsity Triathlon, won his rowing ‘blade' and began competitively running long-distance races. He also reached the summit of Mont Blanc and other peaks in the French Alps. In 2007 Alex led a Greenlandic climbing and sledge-hauling expedition whilst hosting a film-crew on location.

His highlight to date was leading the 2008 record-breaking Tiso Trans Greenland which, at 1374 miles, is the longest fully unsupported arctic journey in history. From 2008 Alex spent a period as a Royal Marines Officer. In the spring of 2010 Alex guided an international team 350 miles across the Greenland icecap. In 2011 he, with team-mate Andrew Wilkinson, covered 330 miles in eleven and a half days across the Greenland icecap from the Nagtivit Glacier to a position on the Russell Glacier.

Alex Hibbert develops and leads polar expeditions which aim to push the limits of human endeavour. He is interested in finding out what human beings are capable of. Alex specialises in unsupported travel (no resupplies or external power) and often opens significant new routes.

His ongoing principles when developing or leading expeditions are:
• Uncompromisingly high professional standards
• Maximising precision and efficiency in all aspects of expeditions
• Commitment to tangible social benefit and communication to wide audiences

Alex Hibbert is also an internationally published photographer. Alex's first book, The Long Haul (Tricorn Books, 2010), tells the gripping story of his epic journey. His second book, published in the summer of 2012, is a photographic account of his various travels in Arctic Greenland.

Now reaching global audiences through public speaking, Alex Hibbert's motivational presentations have achieved outstanding reviews. Topics for presentations are entirely bespoke and can include:
• Motivation and perseverance in all environments
• Team selection and making relationships work under stressful conditions
• Returning to the raw basics and intelligently building foundations
• Developing professional credibility as a young leader
• Coping psychologically with endurance situations

He has been elected a Fellow of the Royal Geographical Society and is a Member of The Explorers Club.

To describe Alex Hibbert's public speaking as motivational would be an understatement. His telling of his story is awe inspiring and is done in matter-of-fact, understated manner - he manages to make the subject accessible and personal while, at the same time, leaving the listener in no doubt of the scale of endeavour required.

Alex Hibbert is a captivating and compelling speaker, rarely have we had an audience as engrossed as when Alex told of his expedition. The tale of his daring, record setting, and endurance is one not to be missed.

Your talk was gripping!

Alex Hibbert not only gave an inspirational talk, he is also evidence that the spirit of genuine polar exploration is alive and well. His willingness to share his experience and advice for young enthusiasts was especially gracious.

Those looking outside their own organisations for inspiration would do well to rally behind this man's vision and be a part of something that has magic in it.

Thank you for your fabulous presentation last night. The people enjoyed it very much.

Clients often ask about purchasing books for giveaways and delegate packs. Below you’ll find a selection of products by Alex Hibbert. Click the images to view on Amazon's website. For bulk orders, please speak with your Booking Agent.

How to book Alex Hibbert for your event