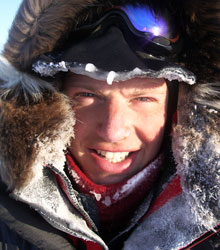 Tom Avery's mountaineering career began at the age of sixteen with a series of rock and ice climbs in Wales and Scotland. At university he organised and led expeditions to the Andes, New Zealand, the Alps, Tanzania and Morocco.

After graduating from Bristol University Tom began his career as an accountant with Arthur Anderson but Tom soon decided his calling was with the great outdoors.

The pinnacle of his climbing career to date was in 2000 when he led a pioneering British expedition to a previously unexplored 20 mile mountain range close to China's western border. His team scaled nine unclimbed and unnamed summits up to 6,000 metres high.

Then, on 28th December 2002, days after his 27th birthday, Tom became the youngest Briton to complete the perilous journey to the South Pole on foot. By using state of the art kites, Tom and his team were able to power themselves across the ice and they covered the last 47 miles to the Pole in just 31 hours, breaking the South Pole Speed Record.

In April 2005, Tom electrified the exploration world by recreating Robert Peary's 1909 expedition to the North Pole. Tom's ambitious aim was to prove sceptics wrong and match Peary's disputed 37 day journey to the Pole. The five-strong team travelled in a similar style to Peary with teams of Canadian Eskimo dogs and replica wooden sledges. After an epic journey across the most unforgiving environment on the planet, the exhausted team rewrote the history books by making it to the Pole with barely five hours spare.

A born leader, this remarkable man runs every expedition himself, organising everything from the fundraising to the training to the logistics to the selection of his teams. His expeditions have received a huge amount of international print and TV media coverage, in the UK and the US in particular.

Tom works as an ambassador for the London 2012 Olympics and The Prince's Trust and is also a member of the Royal Geographical Society.

Thank you for an incredibly exciting and informative presentation. My colleagues and I were all in awe of Tom's achievements. His obvious ability to plan, resource, and successfully execute these ambitious projects provided our management team with some invaluable lessons.

Tom's talk to our invited audience could not have set higher standards. His cheerful enthusiasm and knowledge of the subject brought alive his experiences as though one was there. The depth and range of the questions afterwards bore this out. A hard act to follow!

Clients often ask about purchasing books for giveaways and delegate packs. Below you’ll find a selection of products by Tom Avery. Click the images to view on Amazon's website. For bulk orders, please speak with your Booking Agent.

How to book Tom Avery for your event