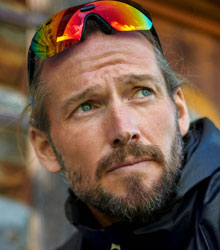 British endurance athlete and long distance runner, Jamie Ramsay, has completed over 43,000 km of mostly solo adventuring in more than 30 countries, completing 24 different adventures. He is a runner, cyclist, trekker and mountaineer.

Following a successful but unfulfilled 12-year City of London career, working for an international communications agency, where he was a newly promoted Partner, Jamie wasn’t happy with the direction of his life and realised if he didn’t make some drastic changes then things would continue to spiral downwards.

Jamie’s solution was to quit his job and focus his time and energy on his passion – adventure running. His motivation was a desire to live life on his own terms: running was already his passion, and it would enable him to do something physically demanding while gaining a particular perspective from travelling on foot.

Jamie chose the 17,000 km route of Vancouver in British Columbia, Canada to Buenos Aires, Argentina because of its relative safety compared to other possibilities and little planning was required; he already had a good level of fitness, having completed several marathons; all he needed was the right equipment.

Having determined the start and end points of the route, everything in between was planned day-by-day. Some days involved running marathon distances or longer, depending on where towns were located. In North America, Jamie’s ‘accommodation’ mostly entailed sleeping in his tent, whereas in South America he frequently stayed in cheap hostels.

Jamie’s diet consisted of porridge for breakfast, pasta and tuna for dinner, and whatever food he could find during the day: fruit, sugar cane, biscuits, and, on one occasion, he claimed in an interview, ate an iguana.

His greatest personal achievement of the mission was traversing the Atacama Desert and then the Andes: Jamie described the scenery as “intensely beautiful”, as he encountered vicunas and flamingos along the way.

The mission took 367 running days to complete, averaging over a marathon each day, crossing two continents and 14 countries, and reaching his destination just in time for New Year's Eve 2015.

During this run he raised funds for CALM, Macmillan and WaterAid.

Following the success of this first adventure, Jamie decided to dedicate his life to pushing his perceived boundaries. Each adventure he undertakes is designed to challenge him in new ways.

His next adventure was the Atlantic to the Andes: A 3700 km solo and unsupported cycle from Sao Paulo Airport, Brazil, to La Paz, Bolivia. The cycle took 28 days to complete and included challenges such as The Chaco in Paraguay, cycling across the Salar de Uyuni during the wet season and a ascending over 60,000m as he climbed the Andes mountains.

In the National Adventure Awards of 2016, Jamie Ramsay won the Scottish Adventurer of the Year, and Physical Endeavour awards.

Then, in October 2017, Jamie undertook Mongolian Camel Trekking, joining a camel trekking expedition that departed Ulaanbaatar with 10 camels heading west across the Steppes. During his time with the expedition they covered over 350 km in temperatures of around -20 degrees Celsius.

Jamie’s other adventures include the 265 km Transalpine Run 2017, coming third in the 400 km Cape Wrath Ultra 2018 and setting the record for solo running the entire UK Three Peaks and running the Scottish Isles.

Jamie Ramsay has been an ambassador for the Land Rover Explore phone, Powertraveller and is a GORE Wear athlete. He also works closely with CALM (Campaign Against Living Miserably) and the Duke of Edinburgh Awards.

Jamie delivered a fantastic story of his adventures and what motivated him to take on such a massive task. His delivery was brilliant and you could see the audience become fully engaged with his open, excited and honest delivery style. The Q&A session at the end was testament to him clicking with the team and we went way over our allocated time, for all the right reasons!

Jamie is unique in that he had a proper professional business career before he became an adventurer and can relate his experiences of both to his audiences. He is an extraordinary captivating speaker with a superhuman story that could motivate anyone to push through the restrictions that we set ourselves not only in our personal lives but in our professions too. Jamie will make you realise that you are in charge of your own goals and aspirations. He left all of us reflecting on our own behaviours and questioning how we can create that sense of adventure and ambition in everything that we do. A true inspirational legend!

He spoke brilliantly, kept the entire room enthralled for an hour and motivated us all to reflect on our own self-imposed limitations and consider our true potential. His story is amazing and his personality infectious, allowing him to engage wonderfully.

I had the pleasure to collaborate with Jamie Ramsay on one of our key Microsoft campaigns. We created 3 videos with Jamie at the centre talking about his inspirational journey across America. The videos and content were amplified on our owned and social channels globally and produced great results and conversations online. Jamie was a professional throughout despite that the massive communication and logistical difficulties our team encountered due to the remoteness of our location in the Andes. Jamie is a very smart and a talented communicator which allows him get the best out of everyone he works with. His passion and energy throughout the project helped make it a successful campaign for Microsoft and I thoroughly enjoyed the time myself and the team spent with him in the Andes.

Jamie’s genuine passion and enjoyment in his life as an adventurer was captivating. He kept the professional business audience fully engaged for over an hour. The time flew past. He invited questions during his talk which made everyone feel like they were part of his story rather than just listening to it. The numerous questions at the end of his talk demonstrated just how enthralled everyone was. Jamie is an inspirational individual and we all feel so much better for having had the opportunity to spend time with him. We look forward to following his ongoing adventures.

How to book Jamie Ramsay for your event