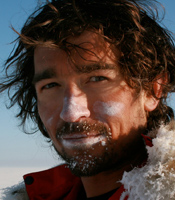 Niall McCann is a bona fide Explorer Scientist, the likes of which has rarely been seen since the great era of Victorian Exploration. He is a travel / adventurer by nature and is completely at home in the jungle and on the road. Niall comes from a long line of scientists and explorers – including his grandfather, father, mother and both brothers. It was Niall's father who first presented him with a large boa constrictor to handle, at the age of 15. As a result, Niall jumps at the chance to tackle any snake – from small, fast and venomous to huge giant constrictors like Anacondas.

In 2010/11, Niall made his television debut as the host of a one-hour award-winning History UK and (US) PBS Television special “Lost in the Amazon”. In it he searches for an iconic British jungle explorer: Col. Percy Fawcett. A Royal Geographic Society Explorer, he is considered to be both the greatest Amazon explorer and the model for Indiana Jones. Millions followed his exploits to find the mysterious Lost City of Z in the Amazon jungle – then, he and his son went missing in Brazil's Mato Grosso in 1925 and more than a hundred people have died looking for him. His disappearance remains one of the greatest enigmas of exploration – but Niall McCann discovered his final camp – providing the best evidence yet as to Fawcett's true fate.

Niall lectures to University, Broadcast and Scientific groups in the UK on a regular basis. He has been asked to Guest-Host the prime time Science-News program DAILY PLANET on Discovery Channel Canada.

The general theme in most of Niall McCann’s talks is achievement, what it is possible to achieve if you try hard enough in any sphere of life, and of challenging yourself to get the most out of life. Niall illustrates his points about leadership, teamwork, overcoming seemingly insurmountable challenges, and backing yourself against all odds with stories and stunning images from his expeditions to the most inhospitable environments on earth.

For adventure groups Niall McCann focuses more on the expeditions and the experiences therein; for business groups he emphasises the 'messages' more, while not detracting from the visceral excitement of the stories and adventures themselves. The expeditions Niall draws upon include rowing across the Atlantic, skiing across Greenland, cycling over the Himalayas, mountaineering and big wall climbing, as well as his many expeditions in the jungles of Central and South America.

Niall talks about his successes and failures, and how he has grown from these and developed the confidence to begin to influence government conservation policy across the world, and of course how he is now able to bring his message to millions of people through his TV work.

Thank you once again for an excellent talk last night! Everyone seems to have been most blown away and inspired after hearing your lecture and by getting the chance to talk to you afterwards.

We loved having Niall here – the staff thought he was absolutely terrific.

Your speech was just fantastic. I've had numerous people comment on the inspirational nature of your talk and it was perfectly pitched. I noticed you had a long queue of folk waiting to speak to you after the close.

How to book Niall McCann for your event