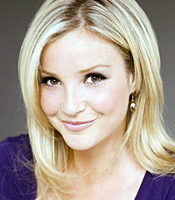 Helen Skelton joined the Blue Peter team in the summer of 2008, as the 33rd presenter of the long running show. During this time Helen has achieved some remarkable feats, and has made a name for herself as the team's all action girl. Her experiences and determination are an inspiration to others, which make her perfect for motivational and after dinner speaking.

In 2009 she became only the second woman ever to complete the Namibia Ultra Marathon, and two weeks later she was back in her running shoes, taking part in the London Marathon for Leonard Cheshire Disability. She has climbed out of a moulin on an Alaskan glacier, beaten a world power boat champion and come in 6th place in the UK Women's Downhill Skateboarding Championships. To say she is game is an understatement!

In 2010 Helen completed her most extreme challenge to date - Kayaking 2,010 miles down the Amazon in support of Sport Relief. Along the way she broke two Guinness World Records; the longest solo journey by kayak, and the longest kayak by a woman in 24 hours. A two-part Blue Peter special documenting her trip was shown in the run up to the Sport Relief weekend.

For Comic Relief 2011, Helen Skelton decided to train in the art of high wire walking and completed a spectacular 150 meter long, 66 meter high walk between the towers of Battersea Power Station. ‘Girl on Wire' was aired as a BBC1 special, and it led to her being nominated for Best Presenter at the 2011 Children's BAFTAs.

In late 2011 early 2012 Helen completed The Polar Challenge, in aid of Sport Relief 2012. The feat saw her tackling the icy and treacherous 500 mile Antarctica terrain to reach the South Pole, setting a new Guinness World Record title in the process, for the fastest 100km by kite ski.

Helen Skelton's other presenting credits include her covering the London Marathons in 2010 and 2011 as part of the BBC 5 Live team. Since then she has reported from the Epsom Derby and Wimbledon Championships for the station. During the two week tennis tournament she co-presented a daily podcast with Jeff Tarango for the 5 Live website, rounding up all the day's action both on and off court. Helen was also part of the BBC presenting team for the London 2012 Olympic coverage reporting live from the Olympic park and BMX track.

Having grown up on a farm in the Lake District, it was inevitable that Helen would return to her rural roots, and over the last year has reported for Country Tracks and more recently joined the Countryfile team.

Previous corporate work has included her writing a feature for The Sunday telegraph sponsored by Range Rover, hosting the Tollymore National Outdoor Centre launch event, speaking at the Kendal Mountain Festival, delivering a presentation at the NHS Cumbria AGM, and working with Bupa Team Telegraph when she captained and mentored three ‘Team Telegraph' members to run the 2010 Bupa Great North and South Runs.

Helen Skelton is available for a variety of corporate work, from awards hosting to motivational and after dinner speaking.

Helen can speak about her inspirational Amazon adventure and other exploits for a variety of audiences, tailoring her speech for each client.

Helen Skelton was absolutely excellent on Friday at the Paragon Vets special evening at Carlisle Racecourse. I'm sure that won't come as any surprise! She was friendly, natural, endlessly patient with the kids, and really good fun. She did a great talk which really gave us an insight into her adventures, and won herself lots more fans!

I just wanted to say a really big thank you for all your help with securing Helen Skelton as host for this year's BIG GIG concerts. Helen managed to rope Olly Murs to help her with the first link and after that quickly settled in to live presenting. The final link with Helen starting at front of house near the mixing desk worked really well and Helen developed her own routine with give-aways and having the crowd doing a countdown while she rushed to get back on stage. Helen was chatting to everyone backstage and was a real pleasure to work with. Sarah Hollis of Production North said Helen was the one of the best presenters we have had. Sarah looks at it from an ability to keep the crowd properly entertained between the links as well as how easy and professional someone is to work with... thank you to Helen!

The event went very well overall and Helen Skelton was very popular amongst all the guests (kids and adults). She mixed well with the senior members of the organisations involved, and her speech in the morning was well received. She met the brief she had been given perfectly, speaking with genuine interest. The evening presentation also went very well - the guests were keen to hear of Helen's experiences and again very well received!

Clients often ask about purchasing books for giveaways and delegate packs. Below you’ll find a selection of products by Helen Skelton. Click the images to view on Amazon's website. For bulk orders, please speak with your Booking Agent.

How to book Helen Skelton for your event