Comedian, writer and actor best-known for his double act alongside Bob Mortimer 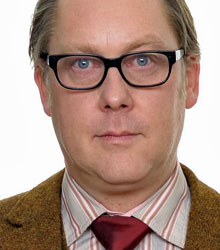 Book Jim Moir AKA Vic Reeves
add to shortlist
About

When Jim Moir, AKA Vic Reeves, was first presented to the public he called himself Britain’s Best Light Entertainer. He could sing, dance, be funny, act and even draw! That was at the start of 1990 with the launch of Vic Reeves: Big Night Out and since then he has grown into one of the most treasured entertainers for a generation.

Over the last decade Jim has also written and starred alongside Mortimer in the BBC2 sitcom House of Fools, which aired for two series; played Geoffrey in the BBC rendition Inspector George Gently and competed in The Great British Bake Off for Comic Relief, narrowly missing out to fellow comedy legend Victoria Wood.

‘Vic’ and Bob are award winners in their own right, having scooped Writers Guild of Great Britain Award in 2012 and the Loaded LAFTAS Award in 2011 for their contribution to British comedy over the last 30 years. In November 2015 the duo marked their outstanding impact on our comedy history with a three month UK Tour, ending in February 2016.

Whether he’s appearing as Vic Reeves or himself, Jim Moir is a popular choice for a wide range of corporate bookings. Recent engagements include hosting the BAFTA Video Game Awards, to great acclaim, hosting the Specsavers Celebrity Spectacle Wearer of the Year Awards and featuring on the panel of the live Sky Movies Debate: Which is The Best Batman Movie?

We are really pleased with how the event went…Vic [was] really well received by the audience and fellow panellists alike – all 5 members of the panel stayed for a full hour after the debate to have drinks together in the garden!…The audience were really receptive to Vic…And both Sky Movies and Shortlist agreed that [he was] a great fit for this event. His presentation was very funny and anecdotal, which the audience responded well to.

A very big thank you to Vic for his contribution to our project; he was delightful to work with. He was such a professional and great fun to have involved. We would certainly consider using him again if the event or project was a right fit.

Beattie Communications, on behalf of SpecSavers Celebrity Spectacle Wearer of The Year Awards.

Clients often ask about purchasing books for giveaways and delegate packs. Below you’ll find a selection of products by Jim Moir AKA Vic Reeves. Click the images to view on Amazon's website. For bulk orders, please speak with your Booking Agent.

How to book Jim Moir AKA Vic Reeves for your event