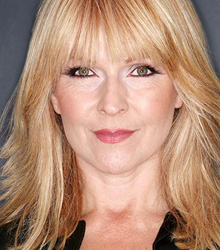 In a career spanning over 18 years Toyah has had 13 top 40 singles, made 15 solo albums, appeared in over 20 stage plays and made 10 feature films.

Toyah's presenting career began in October 1992 with 1st Night for Mentorn Barraclough Carey, then in January 1994 when she was asked to present Meridian Television's 'Anything Goes' and 'Time Off' programmes. In October 1995, she presented the 'Discovering Eve' series for BBC1 a search of spirituality in women's lives and she became the only female ever to play the title role in the BBC Radio 4 dramatisation of Peter Pan, which received massive critical acclaim.

In 1996 Toyah presented 'The Good Sex Guide Late' for Carlton Television every Friday night as part of the new late-night series of programmes, she also began presenting on the 'Holiday' programme, 'Fasten your Seatbelts' and the 'Watchdog' series 'Face Value' all the for BBC.

During the years of 1997 - 1999 Toyah presented a series of programmes for the music channel VH1, namely 'Into the Music' ,'Weekend Review', her own show 'Toyah' then 'Toyah & Chase' and 'Happy Hour'.

1999 saw Toyah sing 'The Rose' and present the Valentines Day special of 'Songs of Praise'. Not long after, she began presenting for BBC Manchester's 'Heaven & Earth' Sunday Morning programme.

She is a very popular celebrity guest and has made appearances on 'The National Lottery Show' (BBC), Through the Keyhole (BBC) Call My Bluff (BBC Birmingham) 'Under Offer' (Meridian), 'The Antiques Show' (BBC Bristol) and 'How Does Your Garden Grow' (BBC Manchester ) 'Never Mind the Buzzcocks' (Open Mike).

During the year 2000 Toyah continued to present for ' Holiday', 'Songs of Praise' and 'The Heaven and Earth Show'. She reported for 'Paradise Found' (ITV) where she spent a week at a retreat in Santa Barbara away from her stressful work routine to go on an adventure to find her true self! She also presented a series for BBC Open University called 'Ever Wonder' and was a team captain for Meridian's property quiz show 'Under Offer', which is now in it's 4th series.

How to book Toyah Willcox for your event