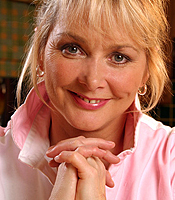 A real life Eastender, Cheryl was born in Bethnal Green on 8th March 1954, Her bubbly personality was evident even in the early days of Bucks Fizz when they won the Eurovision Song Contest in Dublin in 1981.

They went on to gain world-wide recognition with a string of hit records including three number ones, "Land of Make Believe", "My camera Never Lies" and of course "Making Your Mind Up" and throughout this period, it was evident that Cheryl would develop a solo career one day. In 1984 she was asked to present the children's television show, "How Dare You", which set the ball rolling for her as a TV presenter.

Apart from children's favourites such as Record Breakers and Eggs 'n' Baker, she presented daytime current affairs shows, prime-time Saturday evening shows and even dog agility shows! During the 90s, Cheryl was on TV 6 days a week! All this, and she was still singing with Bucks Fizz.

Cheryl now presents for BBC South-East and she is a regular celebrity guest on many TV shows including Ready Steady Cook, GMTV, BBC Breakfast, Ant & Dec's Saturday Takeaway, The Paul O'Grady Show and many more. She presented 'The People's Millions' for Meredian Tonight, and was the sole presenter of the BBC's acclaimed wild-life series, Saving Planet Earth for BBC South-East, receiving the greatest viewing figures from around the country.

She is hugely popular with the general public, who consider her 'the girl next door'. Whenever she makes an appearance either in the media or at events, her charm and personality has everyone, young and old, eating from her hand. People relate to Cheryl – she is 'one of them'. Cheryl is far from perfect and people love her for it.

Cheryl reunited with Mike Nolan and Jay Aston, the three work together as "The Original Bucks Fizz". They perform at major festivals throughout the UK and are regulars on the "Here & Now" tours. And yes – they still rip their skirts off!

How to book Cheryl Baker for your event