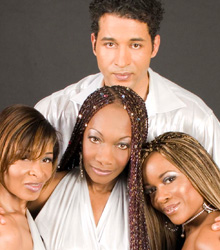 The 1970s saw the birth of Disco - 100% freaking, boogying, hustling, bumping, bus-stopping, pure disco dancing. It started in the mid-70s and continued right through, well into the 80s.

The great mother that gave birth to Disco was Studio 54 in New York where, on the dance floor, tubes studded with lights steadily rose and descended, Flash Gordon style, in a dizzying frenzy, while an unearthly sound system pumped out the steady beat of sizzling dance mixes - often at mind-numbing decibels.

There was a mood, an atmosphere, a carefree, no holds barred, non-stop party of seemingly unaccountable indulgences. It was a magical moment in time... truly unforgettable... totally wild and wonderful.

One of the biggest groups to stand out and make their mark was BONEY M. Their career was comet-like in that they seemed to blast out of nowhere. Suddenly every discotheque around the world played Boney M and every TV show wanting to be hip had to have this stunning-looking and fabulous-sounding foursome from the Caribbean.

Maizie Williams' own story had begun on the tiny and remote, oval shaped Lesser Antilles Caribbean island of Montserrat where she and her five siblings were born under the shadow of one of the many smoking giants in that island chain, commonly named Mount Soufriere. Fortuitously she and her family left for Europe several decades before the smoke would turn to lava and ash and destroy their home, previously one of the most beautiful places in the world.

Maizie finished school in Birmingham, England, went on to study drama, funded by some part-time modelling and, typical of her modesty, was surprised to win the title of Miss Black & Beautiful in a Brighton beauty contest. This inspired the name of her first band, The Black Beautiful People, and the title also opened several modestly lucrative doors to the modelling world.

While on assignment at Modewoche (Fashion Week) in the German town of Hanover she was approached in a restaurant and asked through an interpreter if she would dance to a new record. Suspicious enough to refuse, but even more curious to know if this was for real, Maizie little knew that her fabulous career was about to take off.

Fortunately for us, her hesitation turned into acceptance, and with her massive talent and stunning good looks firmly on board the story of one of the world's most successful bands tentatively began.

Maizie Williams is not only the longest surviving member of the original Boney M band but, along with Frank Farian, probably the most influential in deciding the long term line-up since it was she who vetted the subsequent members to make sure they would all share a certain chemistry.

Maizie Williams and Frank Farian approved and recruited in turn Marcia Barrett, Bobby Farrell and finally Liz Mitchell. Together they went on to establish Boney M in which they all, to different degrees, performed, sang, danced and generally contributed to their greatest ability.

The magic of Boney M continued throughout the 70s and 80s with record-breaking hits around the world. Hits such as Rivers of Babylon. Brown Girl In The Ring, No Woman No Cry, Painter Man, Mary's Boy Child, Rasputin, Ma Baker, It's A Holi-Holiday and many more.

After decades of performing, this amazing Disco-band continues to be loved by fans all over the world. Boney M is still available for live performances both in the UK and abroad, for private parties and celebrations or corporate events.

How to book Boney M - Feat. Maizie Williams for your event