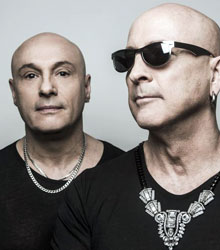 Right Said Fred are one of the UK's most enduring and pop exports, best known for their Top Ten 1991 hit I'm Too Sexy. Formed in 1989 by brothers Fred and Richard Fairbrass, the pair have achieved over 22 million sales globally, have reached number one in 30 countries, and were the first band to achieve a number one in the US with a debut single.

The multi-platinum brothers went on to win two Ivor Novello Awards for their hits I'm Too Sexy (1991) and Deeply Dippy (1992), release nine albums, share stages with big names all over the world, achieve a Brit award nomination, play in front of HM the Queen and release a track for Comic Relief.

Their success is global, having reached fans all over the UK, Europe, the US, and beyond and it all started in a basement studio in Acton, London. The group was named after the novelty song "Right Said Fred", a hit single for singer and actor Bernard Cribbins in 1962.

Prior to forming the group, Richard was a session bassist for artists including Boy George, Mick Jagger and David Bowie, and appears as the bass guitarist in Bowie's short film Jazzin' for Blue Jean. In 1987, Fred appeared as a guitarist in the Bob Dylan vehicle Hearts of Fire.

Back in 1990, Fred and Richard, together with guitarist Rob Manzoli, wrote I'm Too Sexy. Fred and Richard borrowed the money to demo the song and to keep the costs down they recorded at night in a studio in Ealing that had gone into receivership.

The final session was at Red Bus Studios in London in early 1991. I'm Too Sexy along with the song Swan, which also made it onto their debut album Up was rejected by every record label the guys took it to. However, they followed their instincts nevertheless - they knew they were onto something special.

Opening with Richard's vocals only with the (now) iconic lines, "I'm Too Sexy for my love, too sexy for my love, love's going to leave me", the single stood apart from the bland, insipid chart toppers of that year. I'm Too Sexy was tongue-in-cheek, it was fun, and it brimmed with the band's independent spirit, and the band were certainly not interested in following the trends at the time.

Like the best success stories, when it felt like the chips were down, fate was on their side. The band's then-teenage manager, who shared the band's belief, managed to get the track to DJ Gary Crowley and then to the producer of the Simon Bates morning show on BBC Radio 1.

Simon played the track and the rest is history. I'm Too Sexy spent 6-weeks at no. 2 spot in the UK charts (behind Bryan Adams' Everything I Do, I Do It for You) and 4-months in the UK top 10. It charted for 10-weeks at No.1 in the US Billboard Charts, hitting the top of the charts internationally in 32 countries. The song earned the band its first Ivor Novello award.

Their second single Don't Talk Just Kiss was next. With background vocals by soul singer Jocelyn Brown, it hit No.3 in the UK charts by Christmas 1991. It also reached No.1 in the US dance chart and enjoyed international success worldwide from Japan to South American.

However, it wasn't until their third single in 1993, Deeply Dippy, that Right Said Fred finally scored their first UK number 1, almost exactly a year after I'm Too Sexy had secured its place in the annals of pop history. The band received its second Ivor Novello award for Deeply Dippy in 1993.

The success of these singles resulted in the band's multi-platinum debut album, Up, reaching number one in the UK album charts as well as charting worldwide. The album remained in the Top 40 for almost a year. Their lives would never be the same again.

In 2017, both Richard and Fred Fairbrass were credited as songwriters alongside Taylor Swift and Jack Antonoff on Swift’s single Look What You Made Me Do. The song's chorus is a reworking of the famous chorus from I'm Too Sexy.

Right Said Fred have always been a band that continue to surprise and entertain in equal measure; it's the reason why they're still being asked to appear regularly, not only on TV and radio, but at music and family festivals, corporate events and private parties around the world.

The duo present a 25-30 minute playback performance, with Richard on lead vocals/bass and Fred on guitar.

Right Said Fred's vibrant energy, humour and versatility will bring any event to life — and the audience to their feet — with their classic hits including I’m Too Sexy, Deeply Dippy and Don't Talk Just Kiss.

Clients often ask about purchasing books for giveaways and delegate packs. Below you’ll find a selection of products by Right Said Fred. Click the images to view on Amazon's website. For bulk orders, please speak with your Booking Agent.

How to book Right Said Fred for your event