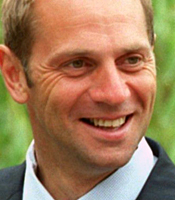 Sir Steve’s other sporting interests include golf and winter sports, and during the 1989/90 season, he was a member of the British Bobsleigh Team. Together with partner Sir Matthew Pinsent, Steven is the holder of the World Record in Coxless Pairs set in Lucerne in 1994 and the Olympic Record, set in Atlanta in 1996.

But perhaps even more impressive than Steve Redgrave's extraordinary athletic performances themselves, is the fact that they were achieved against a background of serious illnesses. He nearly missed the Atlanta Games due to Colitis, for which he still receives treatment, and in 1997 he was diagnosed as diabetic.

Sir Steven Redgrave has been awarded the MBE and the CBE. The University of Durham also awarded him an Honorary Degree in December 1996.

Off the water, he has a busy career representing commercial companies in a PR and promotional capacity at corporate events.

Sir Steve Redgrave a hugely popular and sought-after motivational business speaker, injecting his own style of friendly informality and humour to the occasion.

He speaks about the focus, determination, resourcefulness and brilliant teamwork it takes to achieve Olympic gold.

Clients often ask about purchasing books for giveaways and delegate packs. Below you’ll find a selection of products by Sir Steve Redgrave MBE. Click the images to view on Amazon's website. For bulk orders, please speak with your Booking Agent.

How to book Sir Steve Redgrave MBE for your event