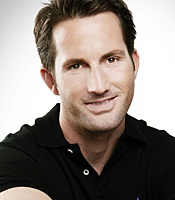 Sir Ben Ainslie, CBE is Britain's most successful Olympic sailor of all time. At his first ever Olympic Games in 1996 Ben won an Olympic silver medal, which would be his last time coming second.

Ben established himself as the world's best after going on to win consecutive gold medals at the next four Olympic Games in Sydney 2000, Athens 2004, Beijing 2008 and then London 2012.

Ben Ainslie's career in sailing began at the age of eight with his family in Restronguet, Cornwall. By the age of sixteen he was Laser Radial World Champion. Then just nineteen years old, Ben won his first Olympic silver medal in the Laser Class at the Atlanta 1996 Olympic Games. Four years later, again sailing the Laser, he achieved every athlete's dream of Olympic gold at the Sydney 2000 Olympic Games.

After Sydney, Ben switched from the Laser to the Finn Class. The move to the Finn meant Ben had to increase his bodyweight by 15kg to achieve the optimum weight for the class. His gruelling training programme paid off when he struck gold once again at the Athens 2004 Olympic Games. Ben Ainslie secured qualification to the Beijing 2008 Olympic Games by winning an unprecedented fifth world title, at the 2007 Finn Gold Cup in Melbourne.

Despite falling ill days before his Olympic defence, Ben Ainslie showed his champion spirit and won his third consecutive Olympic gold medal. This cemented his position as Britain's most successful Olympic sailor of all time surpassing Rodney Pattison's record of two Olympic gold medals and one silver. At the London 2012 Olympic Games in Weymouth, Ben became the most successful Olympic sailor ever when he won his fourth consecutive gold medal!

A truly great and highly experienced speaker, Ben Ainslie shows audiences exactly what it takes to become an Olympic Champion. He has the unique ability to inspire confidence, courage and hope in people and learn about goal-setting, leadership, focus, self-motivation and commitment.

Clients often ask about purchasing books for giveaways and delegate packs. Below you’ll find a selection of products by Sir Ben Ainslie CBE. Click the images to view on Amazon's website. For bulk orders, please speak with your Booking Agent.

How to book Sir Ben Ainslie CBE for your event