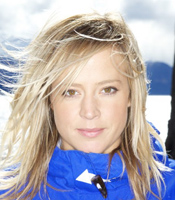 Jenny Jones made history when she triumphantly became the first Briton to win an Olympic medal in a snow event, after winning Bronze for Team GB in slopestyle at the 2014 Winter Olympics in Sochi. A poster girl for Sochi 2014, Jenny is firmly at the centre of a whirlwind success story.

Born in Bristol, Jenny previously competed in athletics (400m, long jump and cross country) and gymnastics whilst at school and learnt to ski on a dry slope, aged 17, when they offered a free half hour introductory lesson. She then went to the Italian Alps on a college trip and decided that she wanted to pursue the sport full time instead of going to University.

After completing her college exams, Jenny worked in the French Alps as a chalet maid in Tignes so she could snowboard every day. After a couple of seasons she became a professional snowboarder and since then she has been competing at the top international competitions.

Jenny Jones is a Slopestyle specialist who has led proceedings on the world stage since bursting onto the scene as precociously talented teenager in 1999, having won four Winter X-Games Gold medals, (she is the first UK athlete to win an X Games gold medal), amongst countless other top snowboard titles. Jenny is now the UK's most respected and successful professional snowboarder.

Jenny's success is all the more remarkable given the lack of natural snowboarding terrain in the UK. These days she spends most of her year on the road, chasing the winter from Europe and North America to the Southern Alps of New Zealand.

Jenny is known for pulling off super technical spins over the biggest of jumps, combining an uncanny natural balance with a strong will to succeed - this same determination has seen her come back from several career threatening injuries. But while she is feared as a competitor on the slopes, Jenny Jones is known for her humble demeanour and bubbly sense of humour, making her one of the most loved athletes in Team GB.

Outside of the ‘day job', Jenny spends as much time as she can with her family in Bristol, and can often be found surfing the not-so-secret spots of England's South West coast.

How to book Jenny Jones for your event