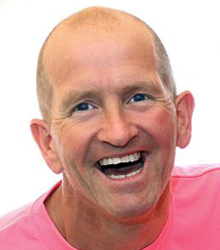 Book Eddie The Eagle Edwards
add to shortlist
About

Michael Edwards, better known as Eddie "The Eagle" Edwards, learnt to ski at his local dry ski slope and quickly became an accomplished downhill skier, narrowly missing out on being selected for the Great Britain ski team at the 1984 Games.

To improve his chances of qualifying for the Calgary Olympics in 1988, he moved to Lake Placid in the US to train and enter races of a higher standard. However, he quickly found himself short on funds. To realise his Olympic dream, he decided to switch to ski jumping for reasons of cost and easier qualification as there were no other British ski jumpers with whom to compete for a place.

Eddie began ski jumping under the watchful eye of John Viscome and Chuck Berghorn in Lake Placid, using Chuck's old equipment. Eddie had to wear six pairs of socks to make the boots fit! He was also handicapped by his weight. At about 82 kg (181 lb), he was more than 9 kg (20 lb) heavier than the next heaviest competitor. However, these were not the only challenges to overcome.

Without any form of financial support for training, Eddie Edwards worked as a plasterer and even slept in a disused Finnish hospital for a short time to save enough money to keep his Olympic dreams alive. Being incredibly long-sighted, Eddie also had to wear his high strength spectacles at all times and, during ski jumps, his glasses often fogged to such an extent that he couldn't see!

Eddie first represented Great Britain at the 1987 World Championships and was ranked 55th in the world. This performance qualified him, as the sole British applicant, for the 1988 Winter Olympics. At that time, he was the British ski jumping record holder despite finishing last in the 70m and 90m events. Eddie has since become famous for personifying the Olympic spirit and for his determination to represent his country without any form of funding.

The press lampooned Eddie as an embarrassment, but at the closing ceremony, the President of the Games singled Eddie out for his contribution. It was the first time in the history of the Olympic Games that an individual athlete had been mentioned in the closing speech, even if it was because of his distinct lack of success!

Shortly after the 1988 Olympics, the entry requirements were strengthened in order to make it impossible for anyone to follow his example. In what became known as the 'Eddie The Eagle Rule', Olympic hopefuls had to compete in international events and be placed in the top 30 percent or the top 50 competitors, whichever was fewer.

Undeterred, Eddie carried on training. Despite making huge advances in performance, he failed to qualify for the 1992 Winter Olympics in France, the 1994 Games in Norway, or the 1998 Games in Japan.

Following retirement from ski jumping, Eddie Edwards has been continually in demand, and went on the become the world number nine in amateur speed skiing, (106.8 mph / 171.9 km/h). He also released a book called 'On The Piste' and even recorded several pop songs in Finland, the most famous of which was called "Munnimeni on Eetu" ("My name is Eetu"). In 2003, he graduated from De Montfort University in Leicester with a degree in law.

Eddie is now in demand as an after dinner and motivational speaker. He continues to work as a commentator for programmes such as ITV's 'The Jump' and has taken part in numerous TV shows ranging from Sport Relief to the celebrity diving show 'Splash', which he won.

A Hollywood movie about Eddie's life starring Taron Egerton as Eddie and Hugh Jackman as his trainer was released in 2016.

Eddie ‘The Eagle’ Edwards, forever remembered as the British underdog, is perhaps the best example of a heroic failure, whose perseverance and achievement was gained without any sponsorship or funding.

A unique British sporting hero, his incredible real-life story continues to win over audiences. Eddie has toured the globe as a highly sought-after speaker, sharing a tale of determination and failure. Join Eddie Edwards as he recounts his life journey, from learning ski-jumping to undergoing extensive surgery to rebuild his face and body; his quest to break stunt skiing records and how he became the most unlikely pop-star in Finland.

A brilliantly comedic and inspirational sports speaker, there really is no one else like Eddie “The Eagle”!

Just wanted to say a huge thank you to Eddie Edwards! What an absolutely lovely guy. He was brilliant with everyone and really made the day very special. I hope he enjoyed it as much as everyone else did here. We would love to have him back as all the kids, parents and organisers want to run the event next year and of course bigger!

Eddie The Eagle was fantastic, from the moment you suggested him to the end of conference yesterday it has been nothing but plain sailing, we particularly appreciate his willingness to give up his time and participate in pre event media. His story is wonderful and was perfect for this event. I have been shouting from the rooftops about this one Sally and I only hope there is some more work in Ireland for him. 10/10 on this one.

The event was a huge success! Eddie was amazing and we couldn’t have asked for a better VIP guest.

Clients often ask about purchasing books for giveaways and delegate packs. Below you’ll find a selection of products by Eddie The Eagle Edwards. Click the images to view on Amazon's website. For bulk orders, please speak with your Booking Agent.

How to book Eddie The Eagle Edwards for your event

Tags for Eddie The Eagle Edwards