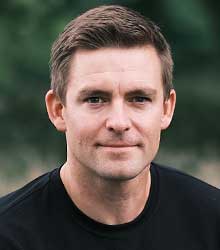 Pete Reed was introduced to rowing very late on, having been spotted using a rowing machine in the gym whilst studying for an Engineering degree at Bristol UWE. By the end of his degree he had trialed for the National squad and represented Great Britain at the under 23 World Championships.

Following his 2:1 at UWE, Pete was accepted on a 2 year MSc of Research degree at Oxford University in 2004 and his extraordinary progress as an elite rower continued when he earned an Oxford blue in the 150th University Boat Race. He also represented Great Britain in the senior men's pair at the World Championships in Poland, but unfortunately after such a great year narrowly missed out on Olympic selection for Athens.

In 2005 Pete Reed again represented Oxford, winning the Boat Race comfortably. He then stormed into contention for Great Britain's top men's boat by recording the fastest British time ever to win the GB National Trials, only 3 years after taking up the sport! Following trials Pete was selected into the men's lead boat; a Coxless Four with Alex Partridge, Andrew Triggs-Hodge and Steve Williams. They were unbeaten in 2005!

In April 2006, Pete again won the National Trials to assert his position in the men's four. He defended his World Championship title at Dorney Lake, Windsor in August 2006 to become double World Champion. The Four went on to complete an incredible run of 27 races unbeaten, which came to a disappointing end at the 2007 World Championships in Munich.

The disappointment was short lived when in August 2008 Pete achieved his ultimate goal of winning an Olympic Gold medal when the coxless four showed incredible character and rowed through Australia in the final 300m to win one of the most memorable races in Olympic history.

After Beijing Pete Reed took on a new challenge in the Men's Pair, alongside rowing partner Andy Triggs-Hodge. They secured Silver medals in the 2009, 2010, and 2011 World Championships behind their biggest rivals the New Zealand pair.

At the beginning of 2012, having won the GB trials for his 7th consecutive year, Pete moved back in to Coxless Four to form the strongest GB boat ahead of London 2012 Olympics. Pete was subsequently selected to represent Team GB and won his second Olympic Gold medal.

Pete was awarded and OBE in the 2017 New Years Honours list for services to Rowing.

In September 2019, Pete walked into his local hospital with a pain in his chest, numb legs and unable to pee. The doctors diagnosed a small spinal stroke. Three days later, he was walking around the hospital when the pain returned, but this time it was much more severe. The 6’6’’ three-time Olympic gold medalist had suffered a much bigger spinal stroke and was now paralysed from the chest down.

Just three days earlier, Pete had been completing an assault course as part of his training for the Royal Marines. Ranked Lieutenant Commander in the Royal Navy, he had returned to a full-time naval career after retiring from rowing in April 2018.

It’s a very different life for Pete now, but as he says "There's nothing more beneficial to me now than my athlete mindset. Nothing."

"Where we were going before was a gold medal, we knew what the goal was, we knew the venue, the start time, the standard – typically a second or two faster than the world record," he says.

"It's so familiar it's untrue. I count my blessings that I'm up for that challenge.

"After London 2012, who thought that I'd have a bigger challenge and more motivation to achieve?"

How to book Pete Reed OBE for your event