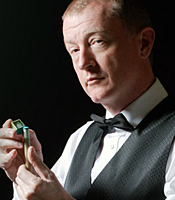 Steve Davis has won a total of 28 ranking and 73 professional tournaments in his career. That's 73 wins from 99 finals! His most important wins are the six World Championships, six UK Championships and three Masters. He was the No.1 player in the eighties, before Hendry came along.

Davis was the first to make a ratified maximum break in a major tournament who had a break of 147 against John Spencer in the Lada Classic at Oldham, Greater Manchester on 11 Jan 1982.

Steve Davis' dry sense of humour and hilarious anecdotes make him a excellent choice for any sporting dinner or corporate function as an entertaining after dinner speaker.

How to book Steve Davis OBE for your event