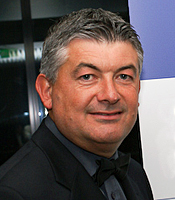 One of the legends of the green baize John Parrott is a former UK, European and World champion. Due to his engaging personality and humorous nature he was invited to be a captain on the hugely successful BBC show A Question of Sport for 6 years with regular sidekick Ally McCoist.

For the past decade John has been one of the main faces for the BBC snooker team both as a pundit and presenter and currently works on the Derby, Royal Ascot and Grand National for the BBC racing team.

He has an in depth knowledge of sport and follows not only horse racing and snooker but his beloved Everton football club. And for the past few years he's been working hard on his golf handicap which currently stands at 2.

John still performs snooker exhibitions and has been an after dinner speaker for well over a decade.

We are delighted to say that John is available for a variety of personal appearances. Whether it's a golf day where he will play and speak after dinner or a corporate trip to the races where he will organise a fun day for all, you're sure to be met by a personable and professional individual.

Clients often ask about purchasing books for giveaways and delegate packs. Below you’ll find a selection of products by John Parrott MBE. Click the images to view on Amazon's website. For bulk orders, please speak with your Booking Agent.

How to book John Parrott MBE for your event