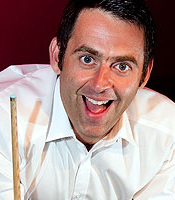 Turning professional in 1992, his entertaining, fast and attacking style of play earned Ronnie his nickname, The Rocket, and has endeared him to millions of fans around the world. The epitome of Ronnie's game is probably the famous 147 that he completed in 5 minutes 20 seconds against Mick Price at the World Championship in 1997, the fasted maximum ever in snooker history.

Ronnie O'Sullivan is considered by many fellow players, pundits and fans, to be the most naturally gifted player ever to grace snooker, a “genius”. Seven times World Champion and most successful ever player Stephen Hendry has repeatedly branded him as the best player in the game.

Ronnie was born in Wordsley, West Midlands, but he grew up, and still lives in Chigwell, Essex. When he was 16, his life was taken upside down when his father was arrested and, later jailed, for murder. Not long after that, his mother was also arrested and jailed for tax evasion. Such events would have been distressing for any teenager and the fact that Ronnie was already a star in his sport didn't make it easier as he had to deal with it all under the scrutiny of the media. There is little doubts that those circumstances are at the root of his well documented issues with depression, drugs and alcohol.

Ronnie, though, is a fighter and has sought solutions to his problems and tried to better himself throughout his adult life. He is currently working with Dr Steve Peters, the well know sport psychologist who helped the British Olympic cycling team and author of “The Chimp Paradox”. He is a keen long distance runner and runs for Woodford Green with Essex Ladies. His personal best over 10 km is 34′ 54”. He insists that running helps him to find a better balance and to keep a clear head.

Ronnie loves all sports, but is particularly interested in athletics, boxing and tennis. He's a massive Federer fan. He loves cars and even participated in the Volkswagen Racing Cup at Silverstone using a Volkswagen Jetta with the car number “147″. He also enjoys cooking and particularly loves – to cook and eat – Chinese food. He's also “famous” for his savoury curries.

Clients often ask about purchasing books for giveaways and delegate packs. Below you’ll find a selection of products by Ronnie O'Sullivan. Click the images to view on Amazon's website. For bulk orders, please speak with your Booking Agent.

How to book Ronnie O'Sullivan for your event