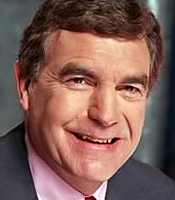 Sir Trevor Brooking is a football legend and Director of Football Development at the The Football Association. Once a gifted midfielder for West Ham and England, he is also a regular BBC pundit and presenter.

Born in Barking, Essex, Trevor Brooking joined the Hammers in 1965 and spent his whole football career with the club, making more than 600 appearances and scoring over 100 goals. He was an FA Cup winner twice, scoring the only goal of the 1980 final against Arsenal with a rare header.

Trevor Brooking made his debut for England in 1974, was capped 47 times and went to the 1982 World Cup in Spain. He joined BBC Radio and Television two years later and has been a regular on Match of the Day and a host on BBC Five Live. He was part of the BBC's coverage of Euro ‘96 and Euro 2000, as well as the 1998 World Cup finals in France. He was awarded the MBE in 1981 and, shortly afterwards, had a road named after him by a local council.

Sir Trevor Brooking is a first class inspiring and humorous after dinner speaker, popular at both private and corporate bookings alike. He is also ideal for hosting award ceremonies and gala dinners.

Clients often ask about purchasing books for giveaways and delegate packs. Below you’ll find a selection of products by Sir Trevor Brooking MBE. Click the images to view on Amazon's website. For bulk orders, please speak with your Booking Agent.

How to book Sir Trevor Brooking MBE for your event