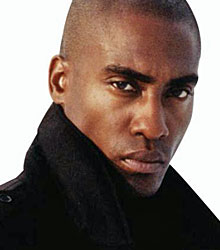 As a member of Blue Simon Webbe achieved phenomenal sales figures not only in the UK, but all across the globe. Blue have had an amazing forty No.1 singles worldwide, selling over 9.5 million albums and 3.5 million singles.

As a solo artist, Simon's debut single Lay Your Hands stormed into the UK charts at No.4 and remained in the Top 10 for an amazing three weeks, garnering massive radio airplay in the process. And with his following single No Worries, and debut solo album Sanctuary, Simon's position as one of the UKs leading singer/songwriters will be established once and for all.

Signed to one of the UKs leading labels, Innocent Records in 2000, the band Blue released their debut single All Rise in May 2001. From the moment this uplifting track hit the airwaves it was clear that Blue had something special, a certain X factor. Suddenly it was OK to like pop again no matter how old you were. The next year saw the band achieve a meteoric rise to fame, becoming the hottest new act to emerge from the UK in years.

Blue gave Simon the chance to develop his natural song writing talents and explore his production ideas. Simon was the key songwriter on many of Blues biggest hits including All Rise, Fly By and One Love. In fact Simon either wrote or co-wrote six tracks on their first multi platinum album All Rise and even more tracks on the two albums that followed One Love and Guilty.

How to book Simon Webbe for your event