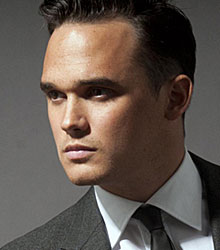 Gareth Gates rose to fame in the first ever Pop Idol TV series in 2001. He became a household name, making it to the grand final and was pitted against Will Young, where he finished runner up.

He went on to sell over 5 million records worldwide and have hits across the globe. His version of Unchained Melody sold over a million copies in the UK alone, and is the third best-selling single of the Noughties. Gareth is also the youngest ever-male solo artist to debut at number 1.

Gareth Gates joined Bradford Cathedral choir at age nine, and became Head Chorister when he was eleven years old. In 1997, he sang solo for HM the Queen at the age of 13, when she visited the cathedral.

In 2009, Gareth moved into musical theatre and has had a hugely enjoyable and successful career, appearing in shows such as Les Miserables, Legally Blonde and Joseph and the Amazing Technicolor Dreamcoat.

He picked up rave reviews for his star performance in the UK tour of Footloose and launched his very own range of tea,Cuppanut- biodegradable tea bags filled with real coconut and mixed with a variety of flavours; Coconut, Coconut and Cranberry, Coconut Ginger and Turmeric.

In 2014, Gareth picked up his skates again to appear in, what was then going to be, the last ever TV series of Dancing on Ice. The finale bought back show winners and viewers favourites to compete for one last time. Gareth had originally appeared in the 2008 series, where he and his professional dance partner finished fourth.

Gareth also found time during 2014 to form a “supergroup” and become part of the second series of the Big Reunion, in the group, named 5th Story, he featured alongside Dane Bowers, Adam Rickitt, Kenzie and Kavana. Following the TV series, the newly formed boy band played arenas across the country with Blue, 5ive, Damage and 3T.

A compilation album, The Very Best of Gareth Gates, was released by Sony Music in 2014. It includes the hit singles from his first two albums and two other tracks from his first album. Gareth Gates continues to perform as a solo artist with his guitarist.

Clients often ask about purchasing books for giveaways and delegate packs. Below you’ll find a selection of products by Gareth Gates. Click the images to view on Amazon's website. For bulk orders, please speak with your Booking Agent.

How to book Gareth Gates for your event