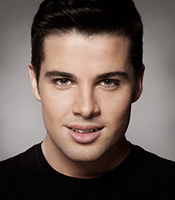 Joe McElderry rose to fame when he won the sixth series of ITV’s The X Factor in 2009. Joe auditioned in Manchester and sang Luther Vandross's song 'Dance With My Father' He was mentored by fellow Geordie, Cheryl Cole. He was announced the winner of the show on 13th December.

His debut single he released as an artist was a cover of Miley Cyrus' 'The Climb. This reached number one in the UK Singles Chart and Irish Singles Charts. The winning prize was a record deal with label Syco, Sony Music Entertainment – owned by Simon Cowell. His debut album titled Wide Awake and was released in October 2010.

Following this, he returned and was also the triumphant winner of the second series of ITV show Popstar To Operastar in 2011, proving that he was still unbeatable when performing under pressure on live television. It was revealed that he had received the most votes in every week that he had performed; 80% of the vote in the final made it clear he was poles apart from the other contestants.

Shortly after, it was the announced on 14th July 2011, that Joe had signed a new recording contract with the world's leading record label, Universal Music. Joe then released a new album entitled: Classic which took him in a new direction, with a range of timeless songs; while having been inspired by a new found repertoire during his time spent being coached by Universal artist and his mentor, the world-renowned Mexican tenor: Rolando Villazón.

"Since winning The X Factor in 2009 I have been on an incredible journey. My new album is a snapshot of where I am today and I am excited about the opportunity to record and perform some of this amazing repertoire. I hope people join me on my musical journey" – Joe McElderry

Joe himself was excellent and charmed the 600+ people who heard him. His easy manner and pleasant personality were obvious and his voice was great to hear. The feedback after the Concert was very positive with many of our regulars saying it was the best of our Concerts they had attended.

How to book Joe McElderry for your event