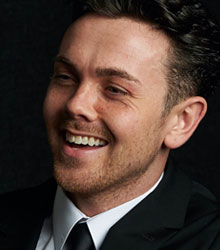 All star entertainer, Ray Quinn is the singing, dancing and acting talent who took the media by storm. From his early award-winning acting roles, to his impressive second place performance on The X Factor, Quinn has proven there is nothing he can’t do when it comes to entertainment.

With a career spanning more than two decades, his platform reaches a range of demographics, perfectly placing him as an event performer and celebrity guest, guaranteed to charm your crowd and get the dance floor filled.

Rising to prominence as a singer, Ray Quinn successfully auditioned for the third series of The X Factor in 2006, impressing audiences and the celebrity judges with his full package act, able to not only sing, but dance and entertain.

After coming second in the series, he had already generated a loyal fan base, so when he quickly signed with SYCO, and released the album ‘Doing it My Way’ in 2007, it’s no surprise that it reached number 1 in the UK charts and went Platinum.

Since bursting onto the scene, Quinn has completed three solo tours, won the Liverpool Local Hero Award 2007 for Contribution to Music and released a new album in 2020; Undeniable.

From the outset, Ray Quinn’s career was destined to be influential, as a nationally recognised child actor, trained at the Merseyside Dance and Drama College in all three performance disciplines. As a young star he appeared in Channel 4’s Brookside, where he handled challenging story lines involving bullying, murder and a number of other dark topics which he was credited for his mature and natural portrayal.

For his exceptional acting, Ray was awarded Best Dramatic Performance 2002 at The British Soap Awards, and Best Young Actor 2002 at the Inside Soap Awards.

A multi-talented act, Ray Quinn’s recent ventures have spanned mediums, including extensive theatre projects. From sold out pantomimes to the UK tour of The Wedding Singer, Quinn’s reputation in the arts is established.

Further high profile appearances include winning Dancing on Ice in 2009 and the All-star series in 2014 and in 2015 he won Get Your Act Together talent show. After a year in 2019 as a series regular on Hollyoaks, he departed to focus on his music, proving his talents and audience appeal are timeless, thus making him the ideal event entertainer.

Clients often ask about purchasing books for giveaways and delegate packs. Below you’ll find a selection of products by Ray Quinn. Click the images to view on Amazon's website. For bulk orders, please speak with your Booking Agent.

How to book Ray Quinn for your event