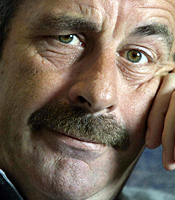 Sam Torrance was one of the leading players on the European Tour from the mid 1970s to the late 1990s and was the winning non-playing captain of the European Ryder Cup team in 2002.

In 2003 Torrance became eligible to play in senior tournaments and he picked up his first win on the European Seniors Tour in 2004. In 2005 he topped the Seniors Tour's Order of Merit.

Torrance played for Europe in the Ryder Cup eight times. In 1985 he sank the winning put which deprived the Americans of the trophy for the first times in twenty-eight years. Seventeen years later he was the non-playing captain on the European team which won the 2002 Cup at The Belfry.

Torrance married English actress Suzanne Danielle in 1988. He was awarded an MBE in 1996 for services to golf and an OBE in the 2003 New Year Honours List for his captaincy of Europe's Ryder Cup team.

Clients often ask about purchasing books for giveaways and delegate packs. Below you’ll find a selection of products by Sam Torrance OBE. Click the images to view on Amazon's website. For bulk orders, please speak with your Booking Agent.

How to book Sam Torrance OBE for your event