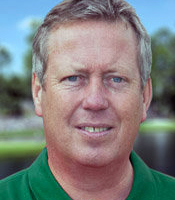 Howard Clark was a successful amateur player at both youth and senior levels, including representing England in the 1973 Walker Cup, before turning professional in 1973.

After turning pro, Howard was a member of the Ryder Cup team for the first team in 1977 and went on to participate in six tournaments. A year later Howard won his first PGA European Tour title and would again help Europe win the Ryder Cup in 1985 (The Belfry).

The 1995 season was perhaps the highlight of Howard Clark's career where his magnificent singles victory early on Sunday morning over Peter Jacobsen in the 1995 Ryder Cup played at Oak Hill (New York) helped establish Europe's advantage as they secured a memorable European victory. During this round Howard famously celebrated a hole-in-one.

Since then Howard Clark has worked for the BBC as a member of their golf team, but in 2000 Howard joined Sky Television as their principle on-course commentator. Aside from golf, Howard enjoys collecting antiques, wine and is a passionate supporter of local football club, Leeds United.

How to book Howard Clark for your event